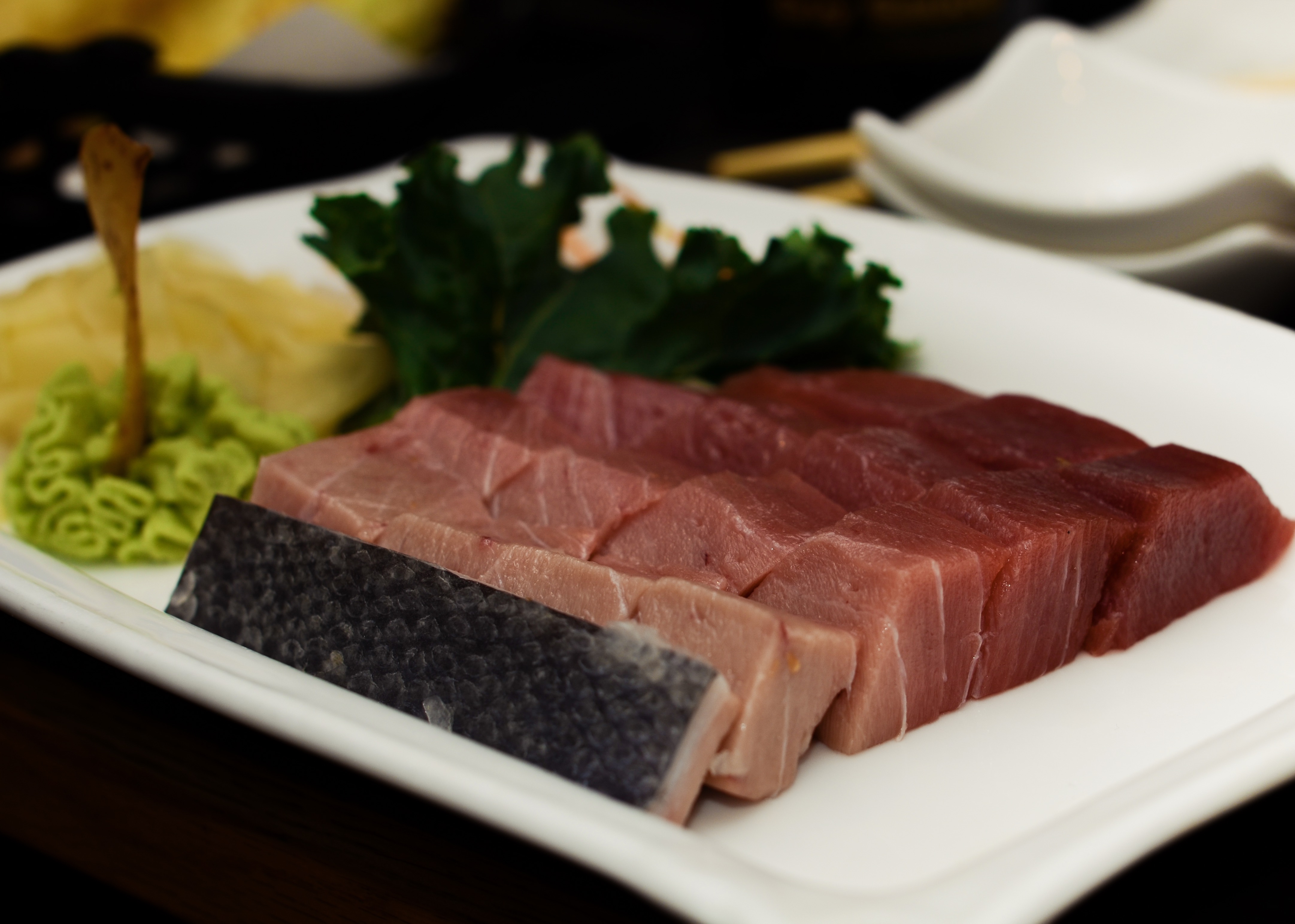 A popular trend that I’ve noticed is people trying their hand at recreating traditional foods with a unique flair to it.

And so while looking for some ramen, we decided to try Shijiki, which we were told did an excellent job of that.

But ramen wasn’t the only thing we decided to try. Instead, we ordered a bit of everything off the menu to get a taste of things. 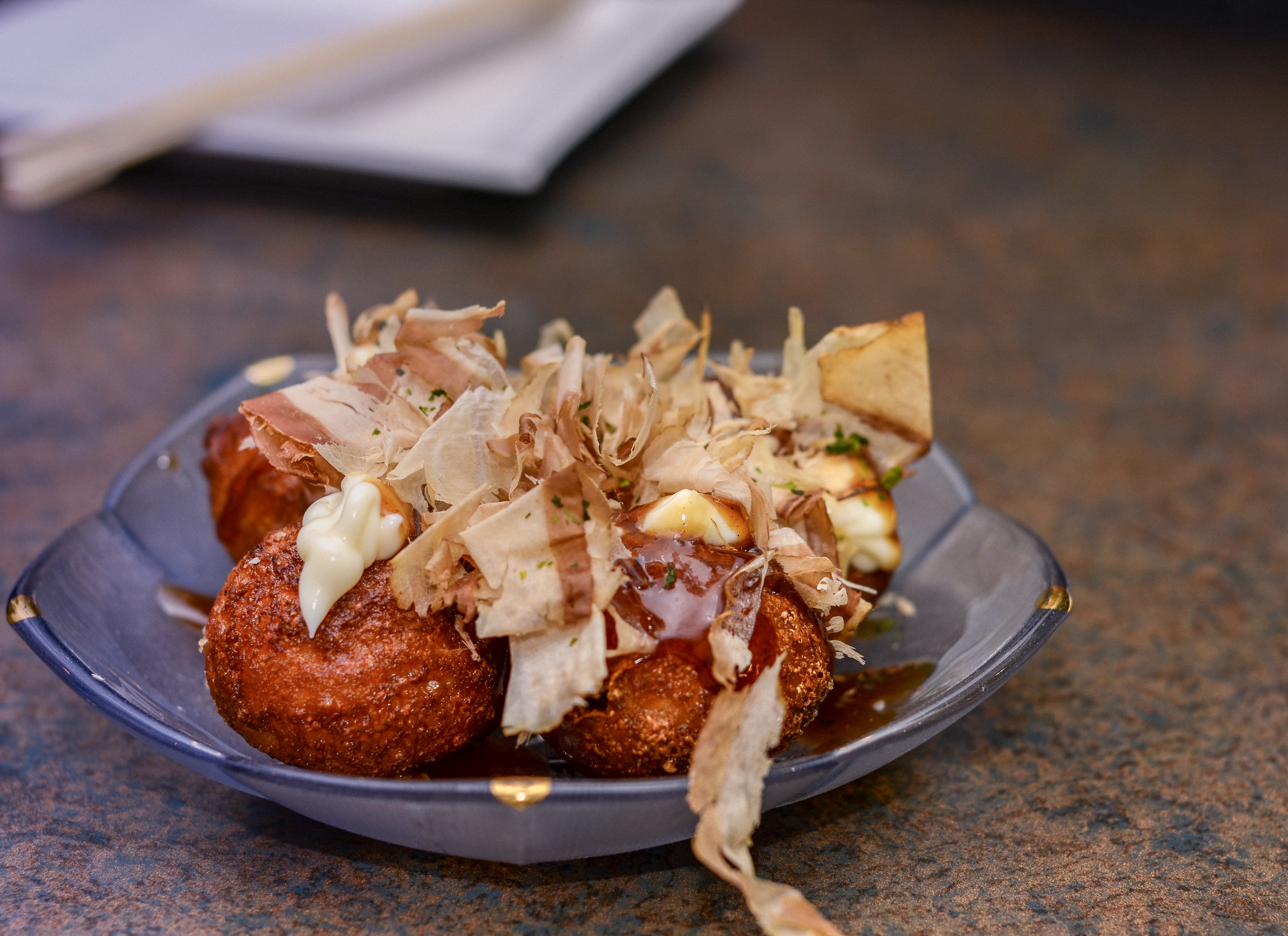 For those unaware, takoyaki is a Japanese snack comprised of a dough ball often with a chunk of octopus. And Shijiki’s weren’t bad.

Just a bit crispier than I’m normally used to so it had a bit more of a bite to it.

Our next appetizer was the mini unagi don. 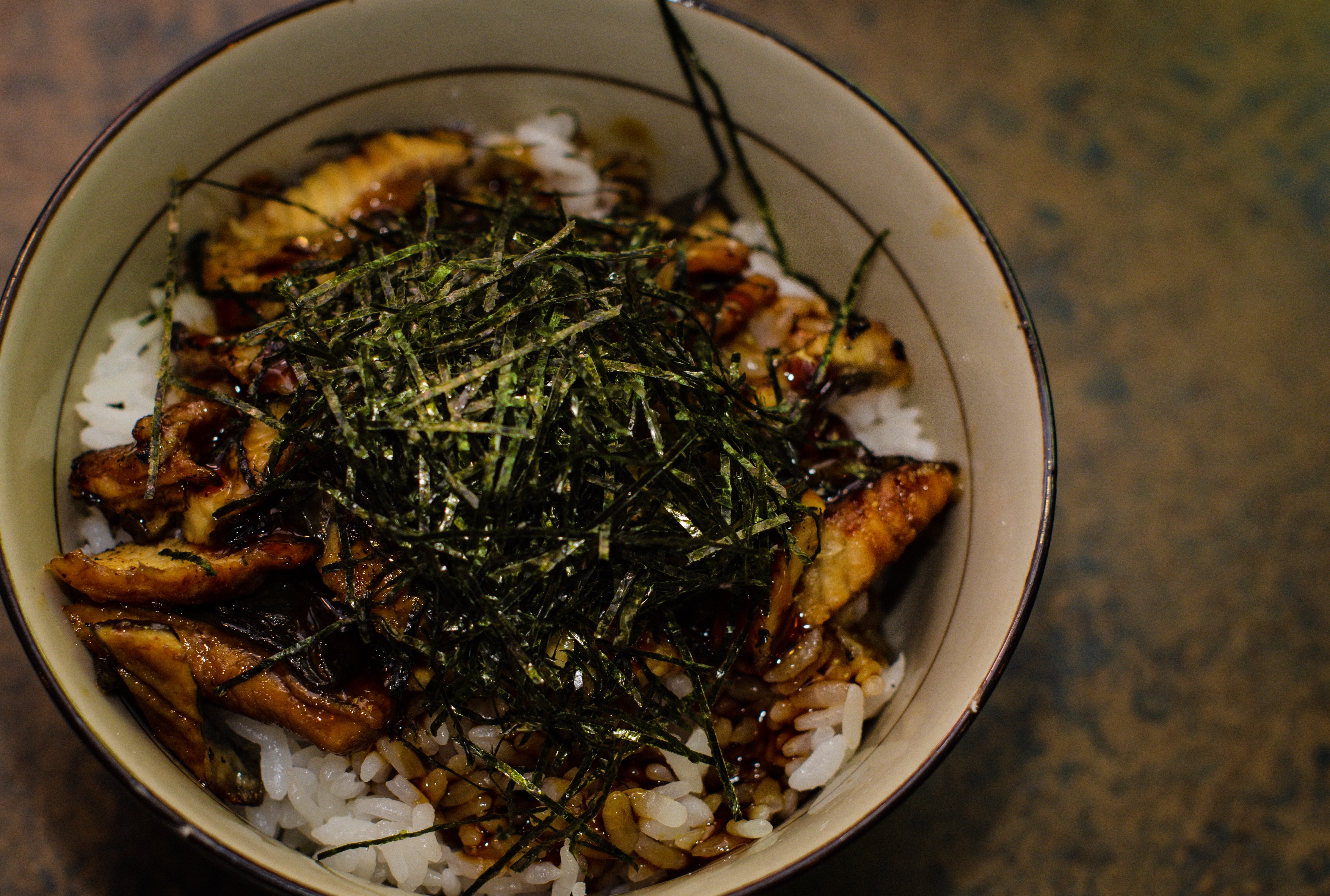 Short for “donburi”, dons are rice bowl dishes with toppings. In this case, barbecued freshwater eel.

I really enjoyed this simply because in the past, full sized dons of any sort were too much for me. Making me too full to eat anything else. I’d literally would eat everything on top and leave the rice. So this was a nice way to get just a taste without filling up.

Having been to Japan and eaten dons there I always feel like it’s missing a pasteurized egg. But this is just a personal gripe and me missing Japan for the umpteenth time.

Our final appetizer before our mains arrived was some beef tataki. 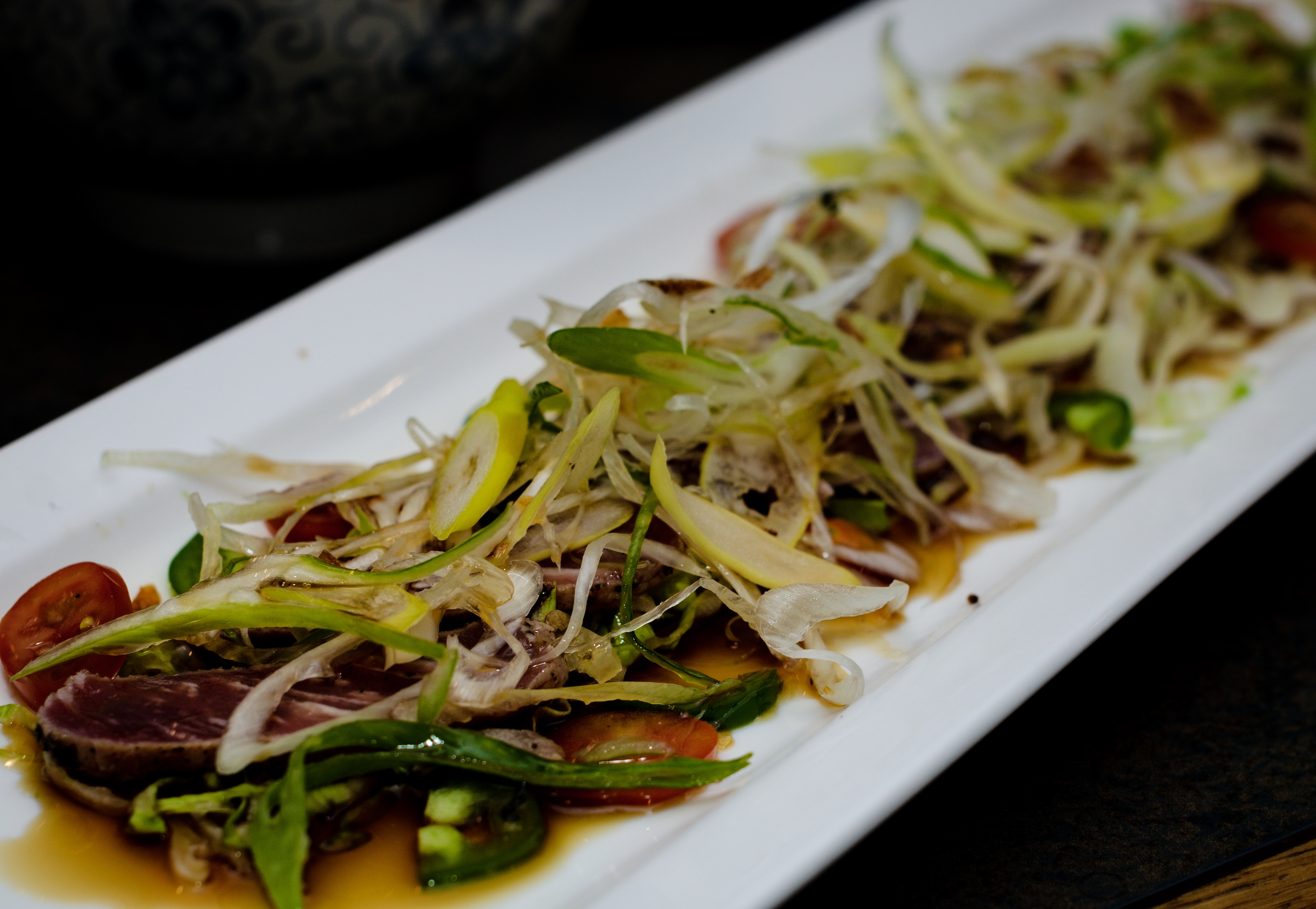 I’m more accustomed to my beef tataki being paper thin as these pieces were considerably thicker. There was a lot more greenery than I was used to.

But the greens aren’t for show and you should probably eat it with the beef. The beef was well, very beefy and the vegetation helps balance the flavour a bit.

And finally, our noodle dishes. My partner got the hot and sour ramen with a side of kimchi. 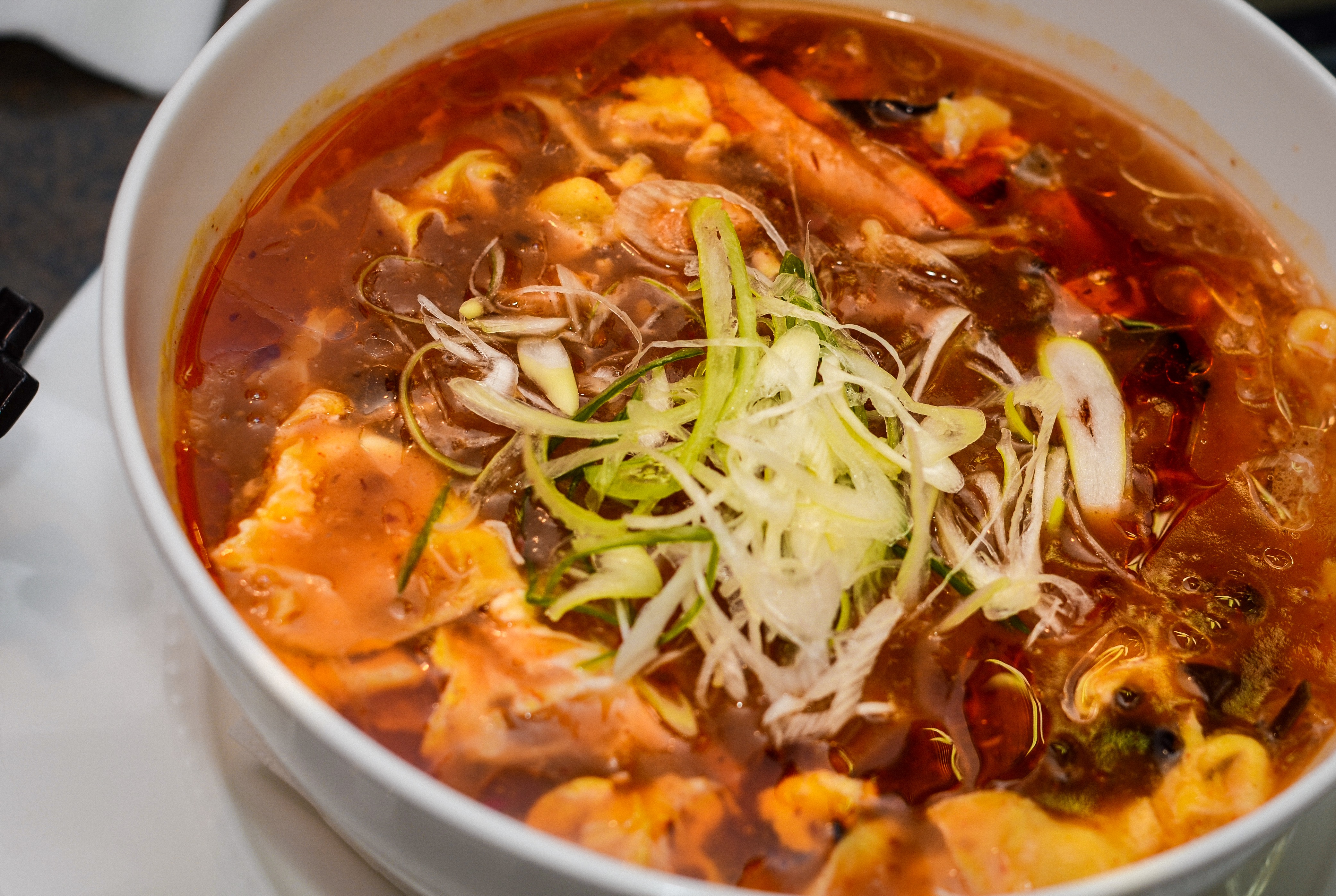 If you’ve ever gotten hot and sour soup from a Chinese restaurant then you’ll know what to expect. For those who haven’t, the soup is exactly as advertised. It is both hot (temperature and spice-wise), sour, very thick and hearty. So bring an appetite because just the soup itself is very filling.

Even the meat slices in the soup remind me of something you could grab from a Mom and Pop Chinese restaurant. Certainly not your traditional Japanese ramen.

I opted for something a little safer, a tempura udon. 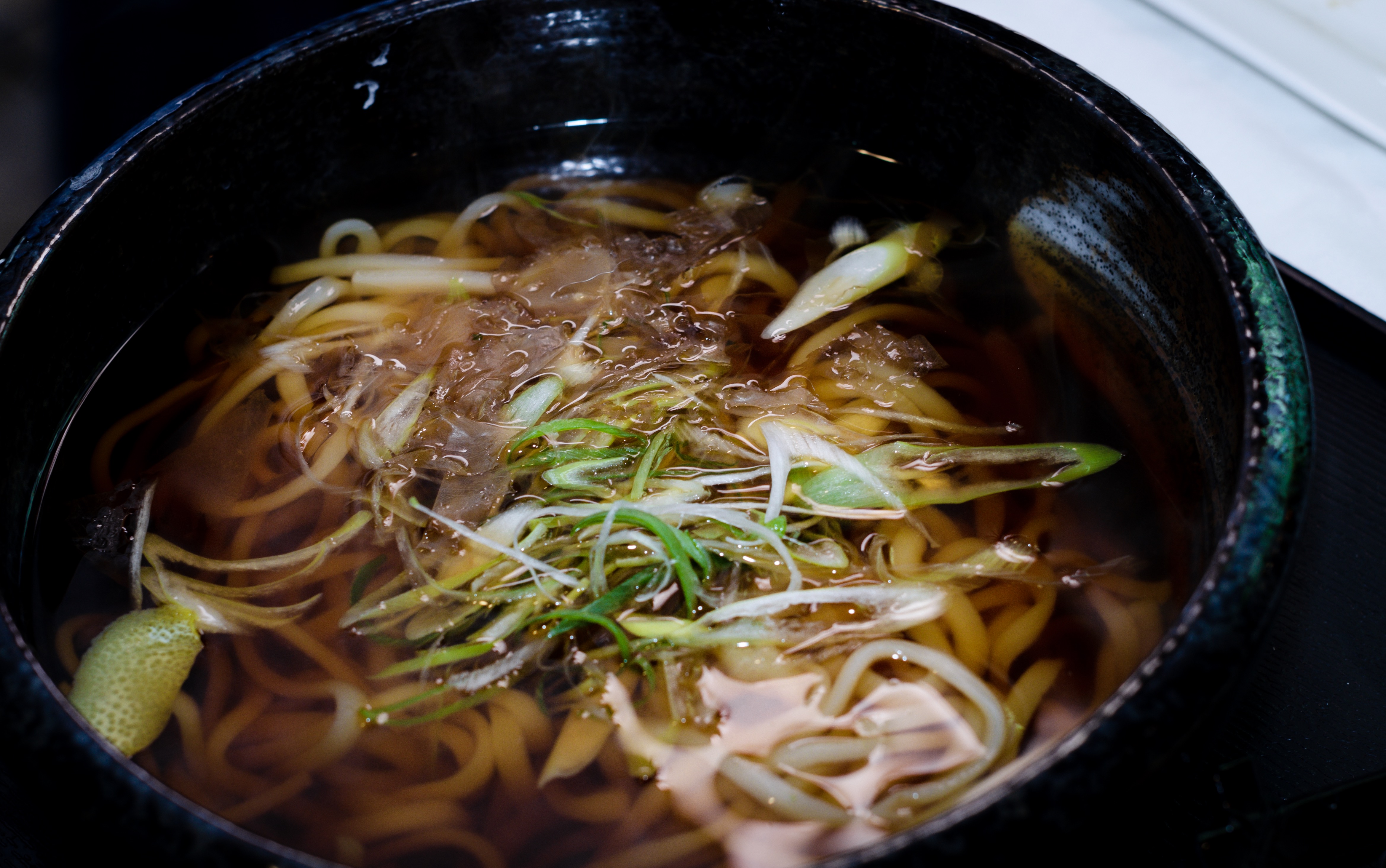 The udon was good. Your standard broth and noodles. But if you might recall, I got some tempura with it. 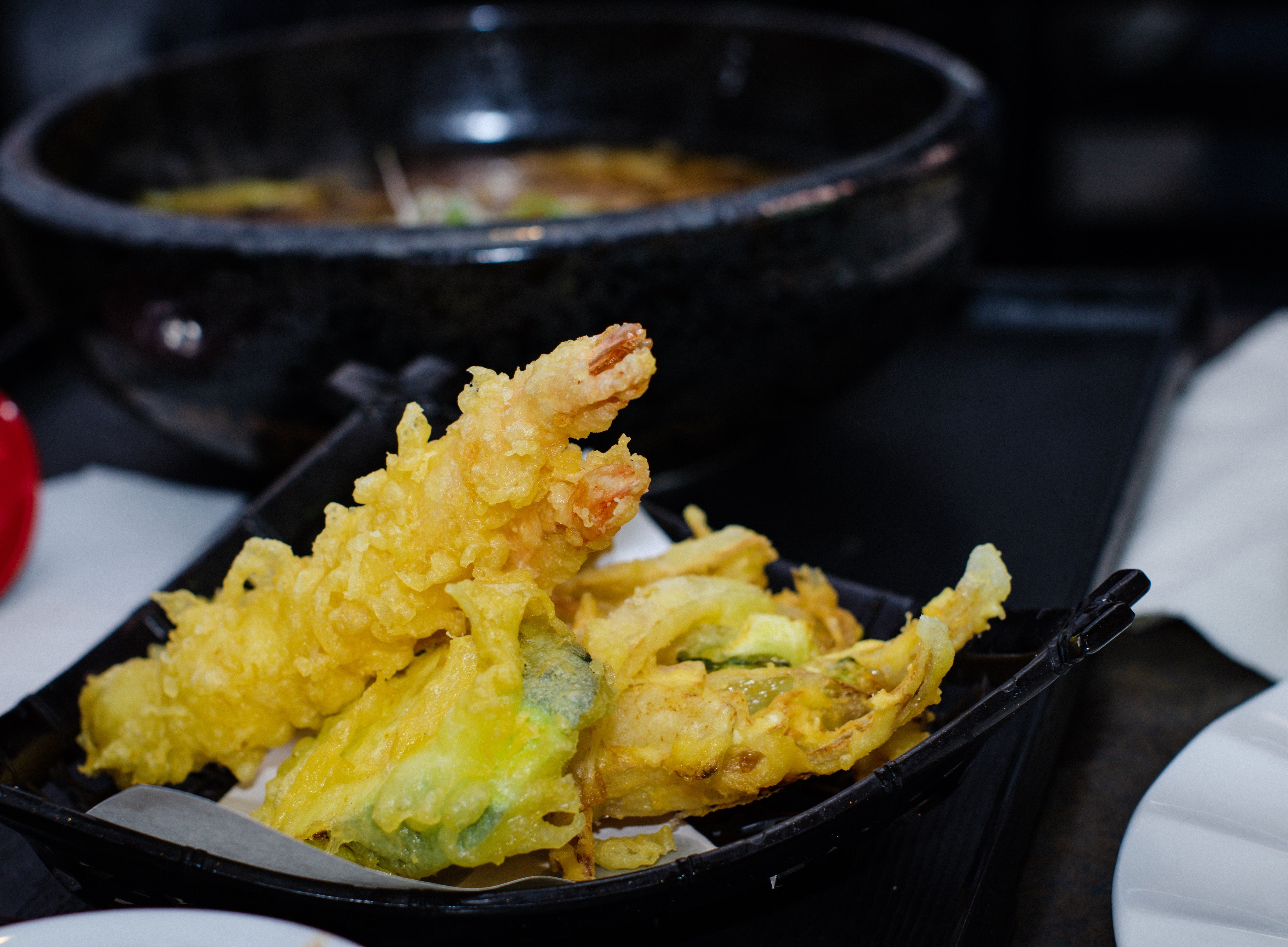 I was initially confused because I expected a dish of dipping sauce for the tempura. But I was quickly informed that I was supposed to dip it into my udon broth.

Again not bad, just not something I was accustomed to. But if you know of any other places where this is standard procedure do let me know in a comment.

Oh and last, but not least. They had a blue fin tuna special. And I knew I needed to get that.

Looks like I’m experiencing a lot of firsts at Shikiji but I’ve never had sashimi presented this way. It’s definitely very artistic, being able to see the different layers of flesh laid out this way.

Though I wish they scaled the skin first because the scales got everywhere.

Also I know someone is going to yell at me for eating endangered blue fin tuna. Go ahead, I’m a bad person, I deserve the scolding.

We enjoyed our meal at Shijiki, even if the focus of our meal wasn’t so much on the ramen, we did enjoy what we got. Next time, maybe we’ll try and focus more on the soup noodle side of things.