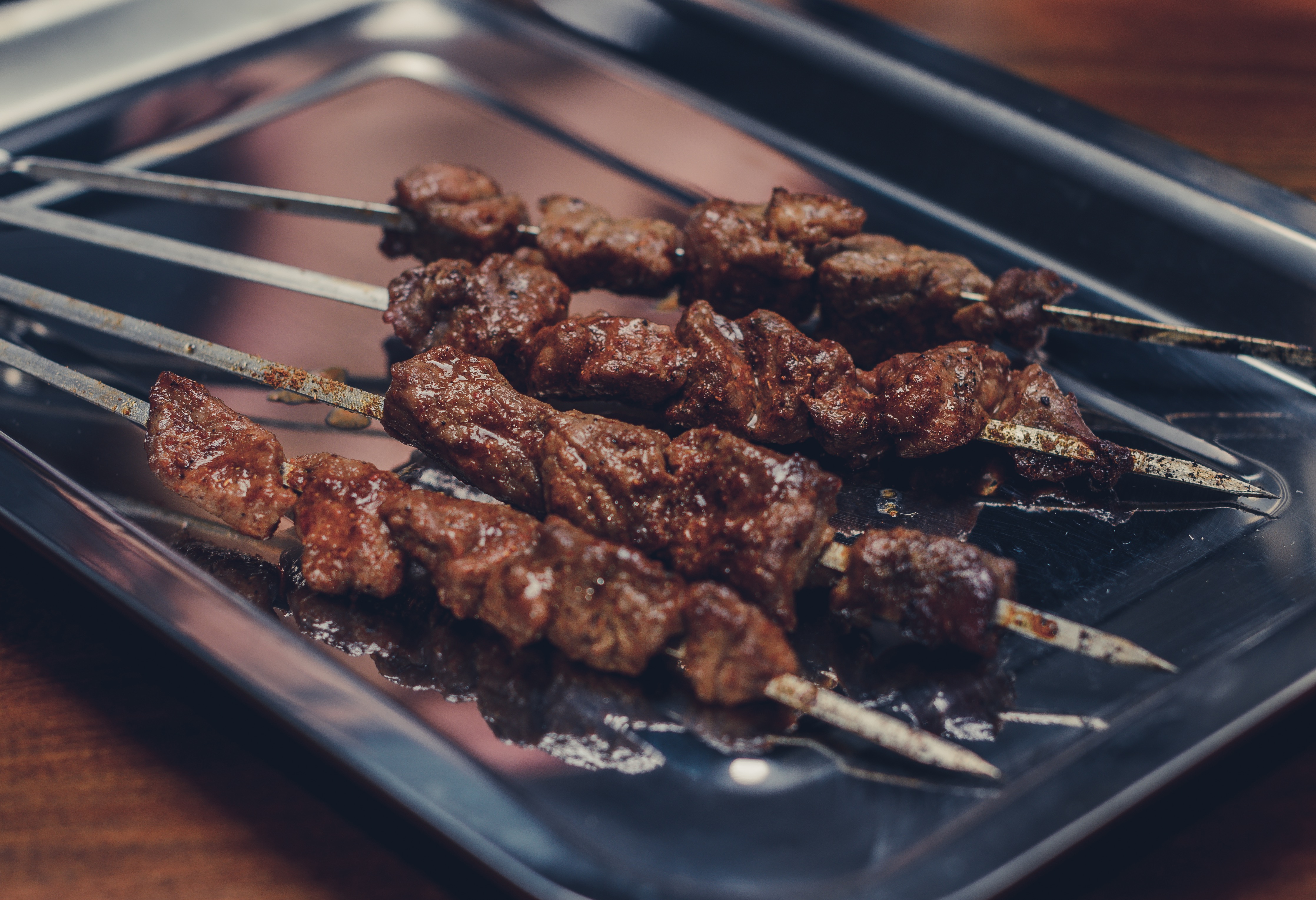 Astute readers may remember President Fu from our Career Fair post several months ago. Well it turns out he’s been busy with other ventures in the background, as he had a very successful grand opening of his new restaurant with his wife this weekend: Sian City BBQ Bar. 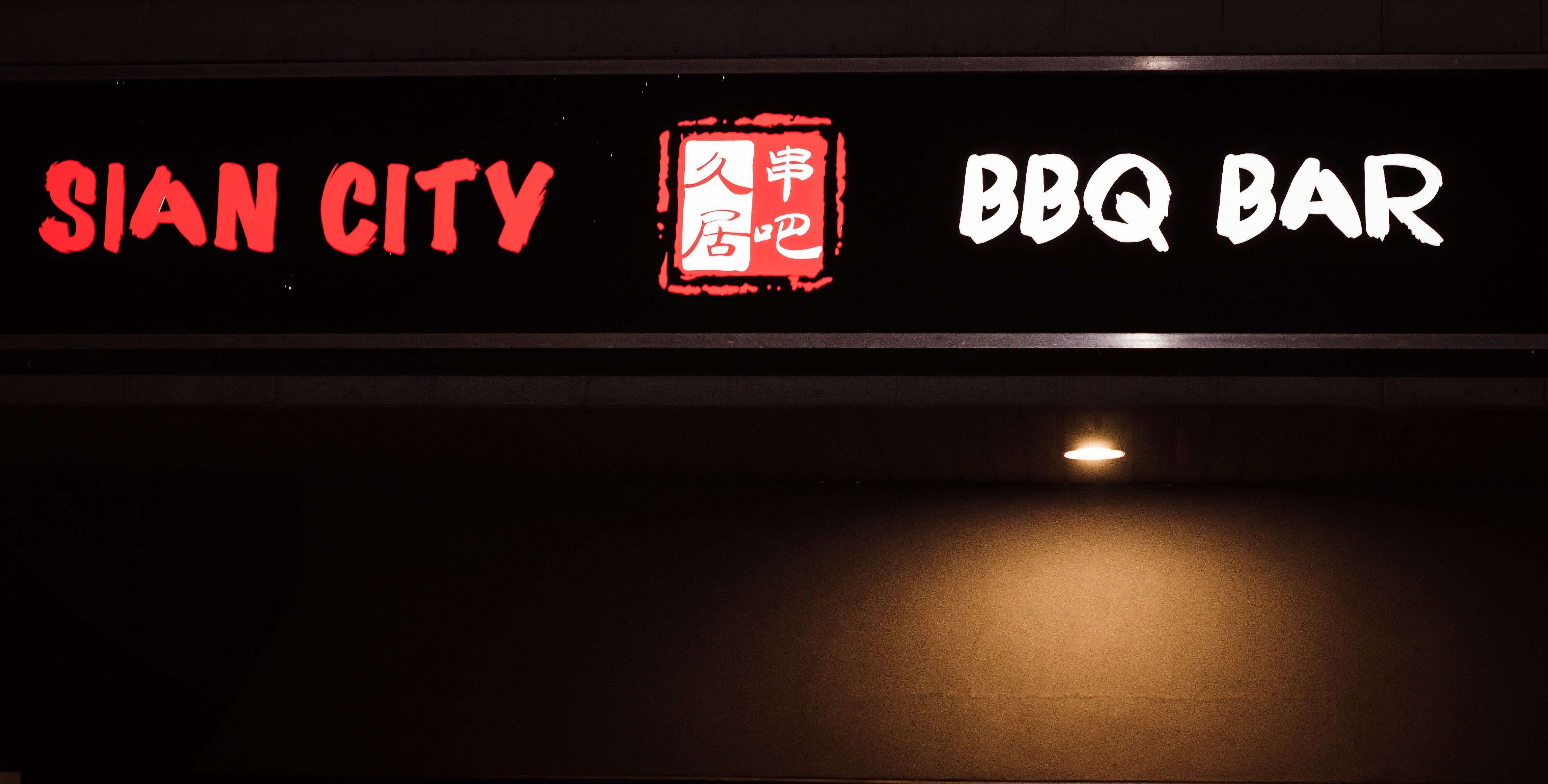 The restaurant is packed with servers rushing back and forth between tables, delivering skewers to waiting patrons.

Meanwhile, the interior is cozy and warm, helped by the wooden benches and tables. I think they were going for a rustic Chinese sort of look and I think they succeeded. 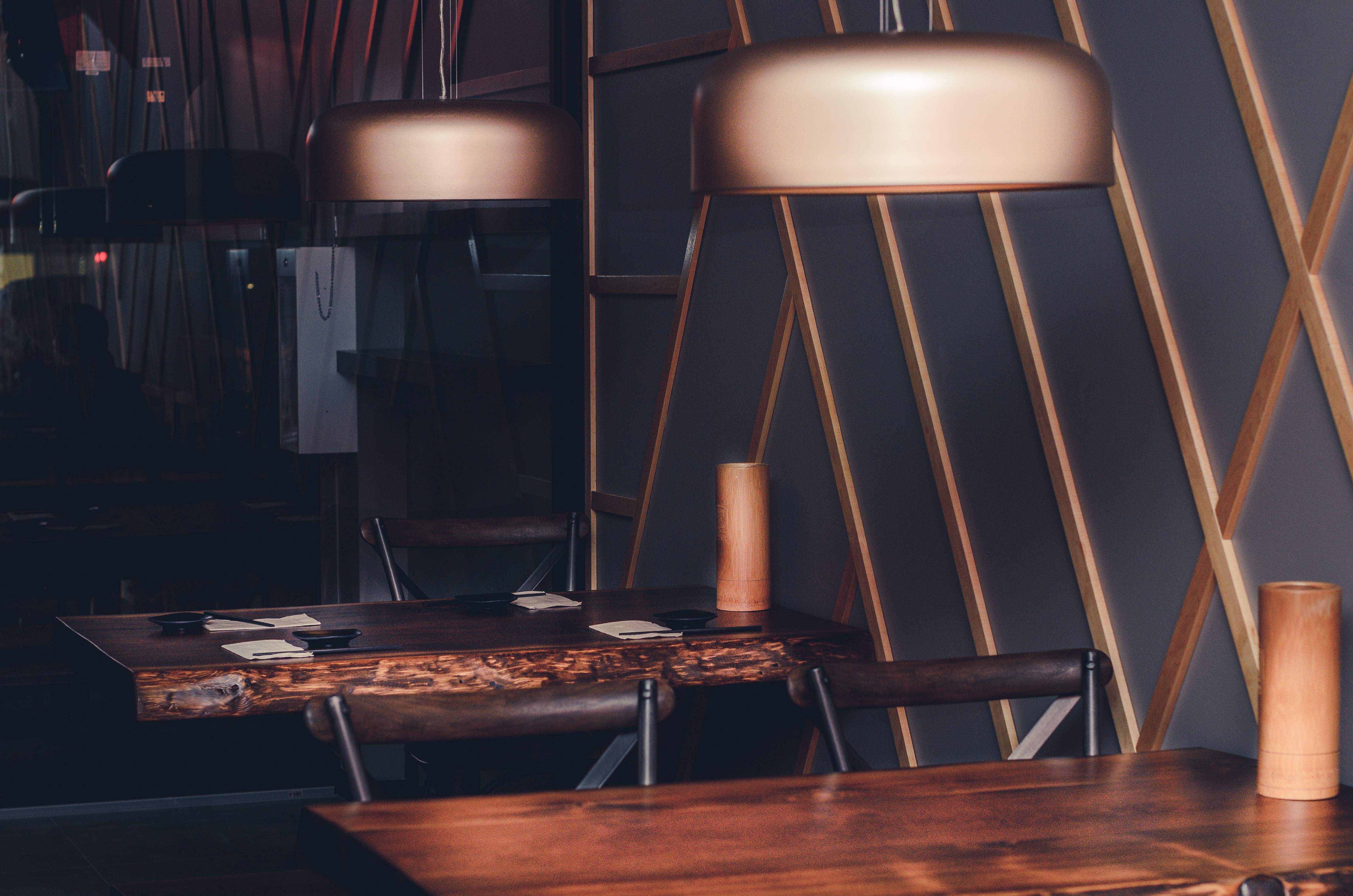 Mrs. Fu’s is seen helping and greeting customers as well. She excitedly pulls me aside to show off the bar.

“It took so long. But I’m so proud of it.” She beams, “Make sure you get a drink next time when you’re not driving.” There is certainly a large selection of liquor and spirits, and for future visits I highly recommend getting a beer to cut through all the meaty grease and fat you’re going to consume. 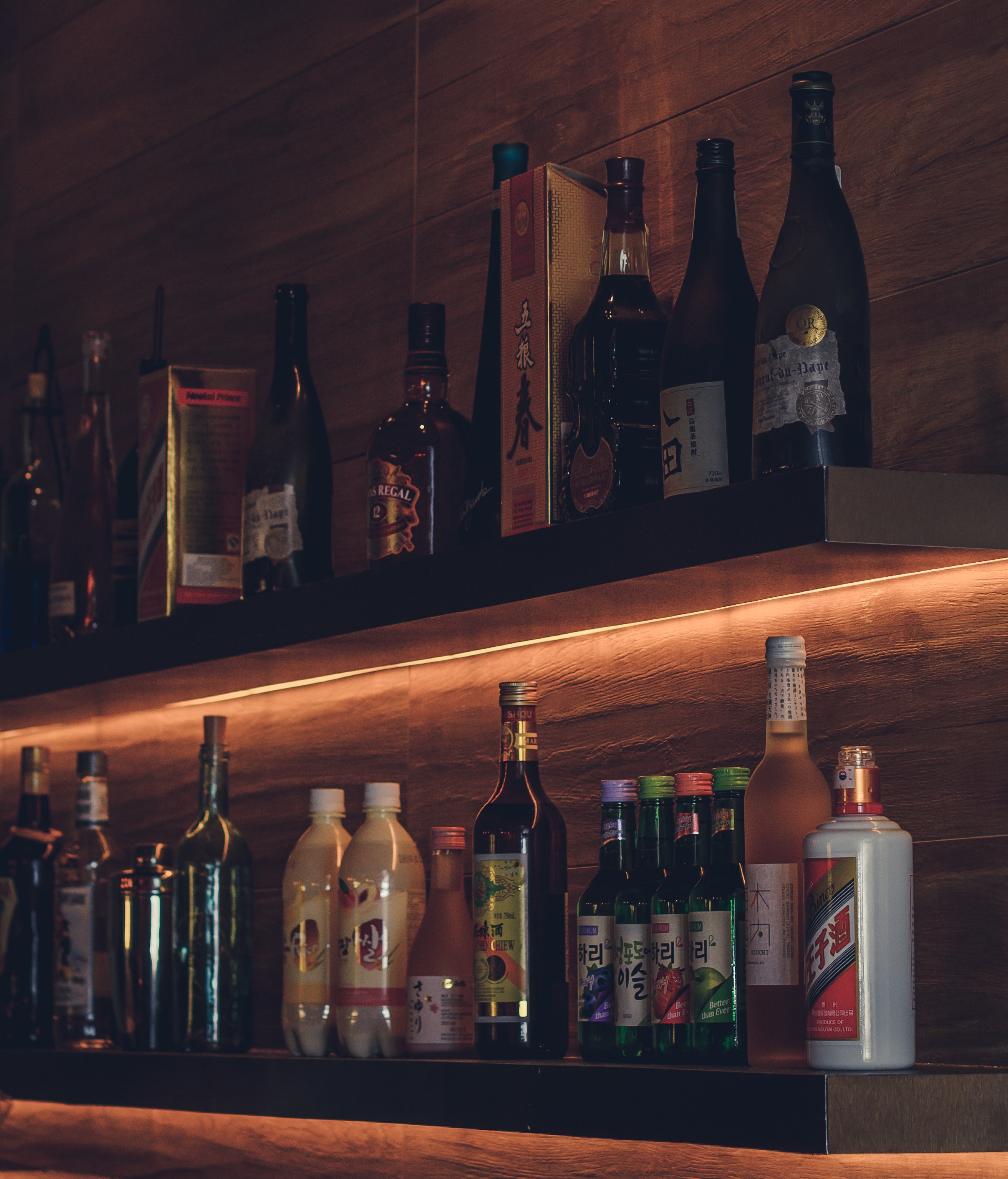 Don’t worry, there are non-alcoholic drinks available as well. And we get a few of the mocktails while we wait.

Oh and for the environmentally conscious, the straws are biodegradable. 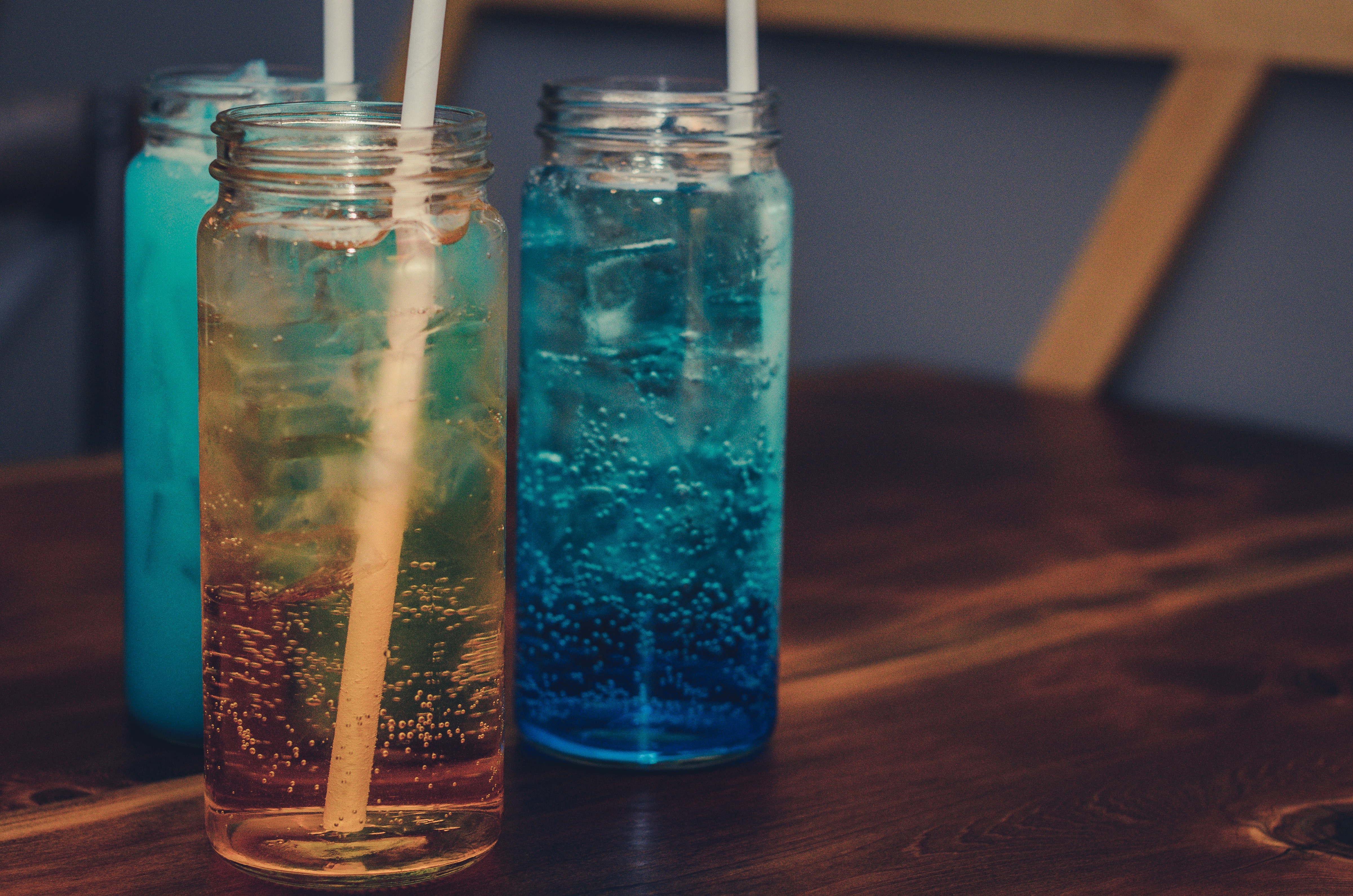 We start with some lamb skewers.

The spices are reminiscent of street food from China but the lamb is still soft and tender without being chewy. It is a bit too spicy for my liking but that could be because I’m a huge baby when it comes to spicy foods.

Won’t stop me from eating it and then crying my eyes out later though.

We also get a smashed cucumber salad to snack on between skewers. 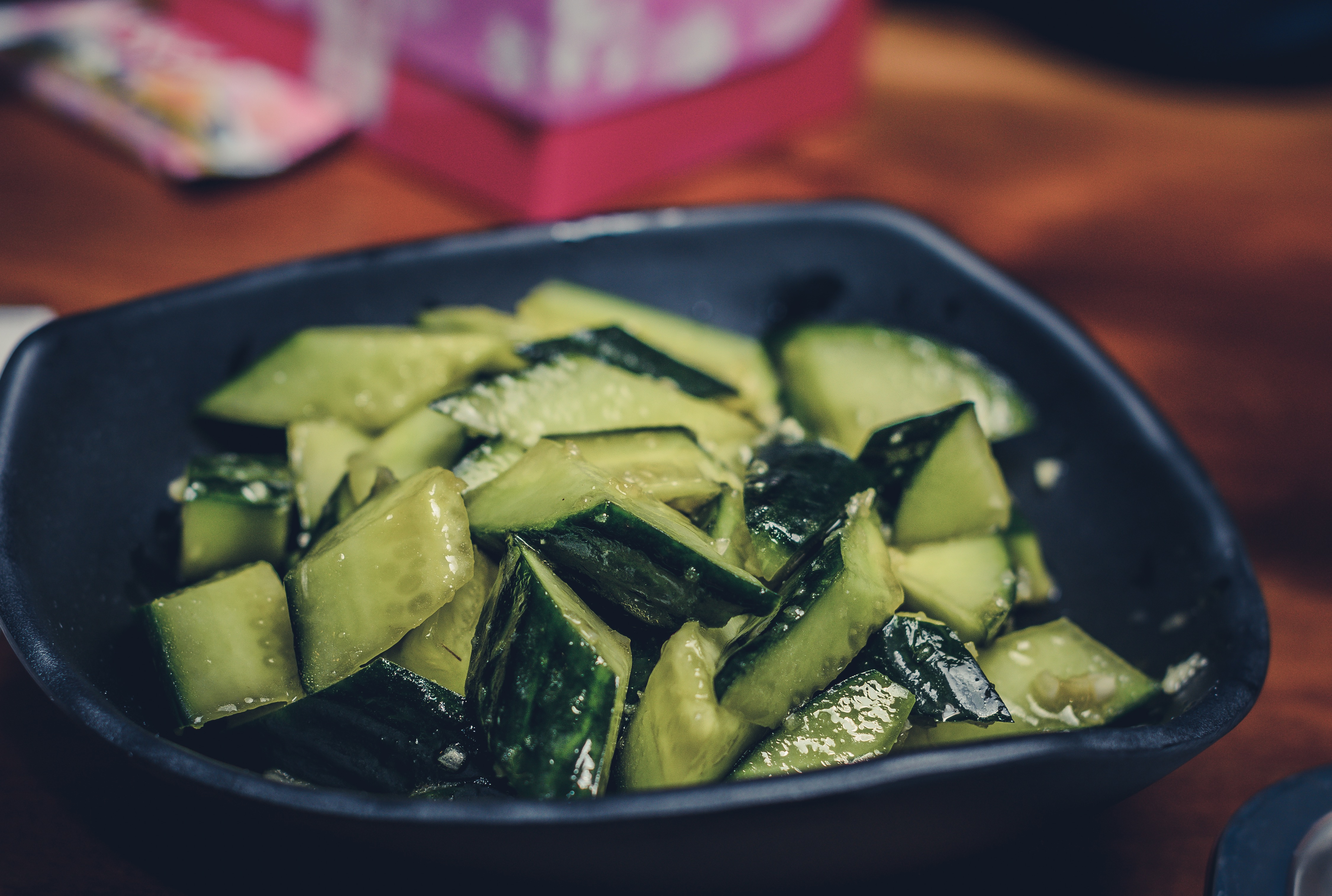 Talking to some of the other patrons it turns out that this is a pretty common dish in mainland China.

It’s definitely a bit heavy on the garlic, so don’t kiss anyone after eating it. But it also pairs nicely with a lot of the meat and provides some much needed greens to a meal full of meat.

Our first seafood skewers were shrimp. 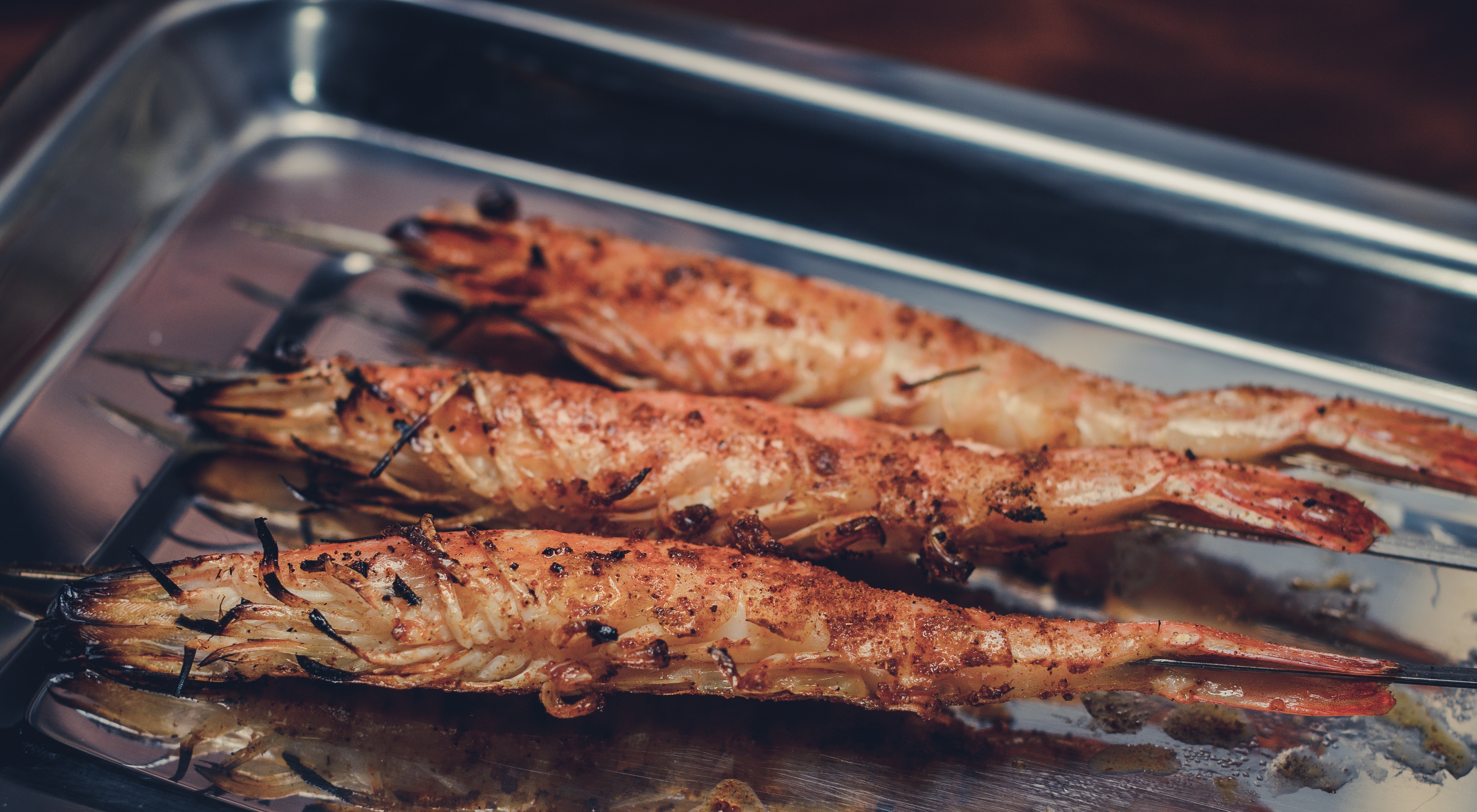 I know it’s going to sound weird, but you can eat the shell. And I did. It’s been grilled enough that it’s just crunchy enough to eat.

We also got to try the chicken wings. 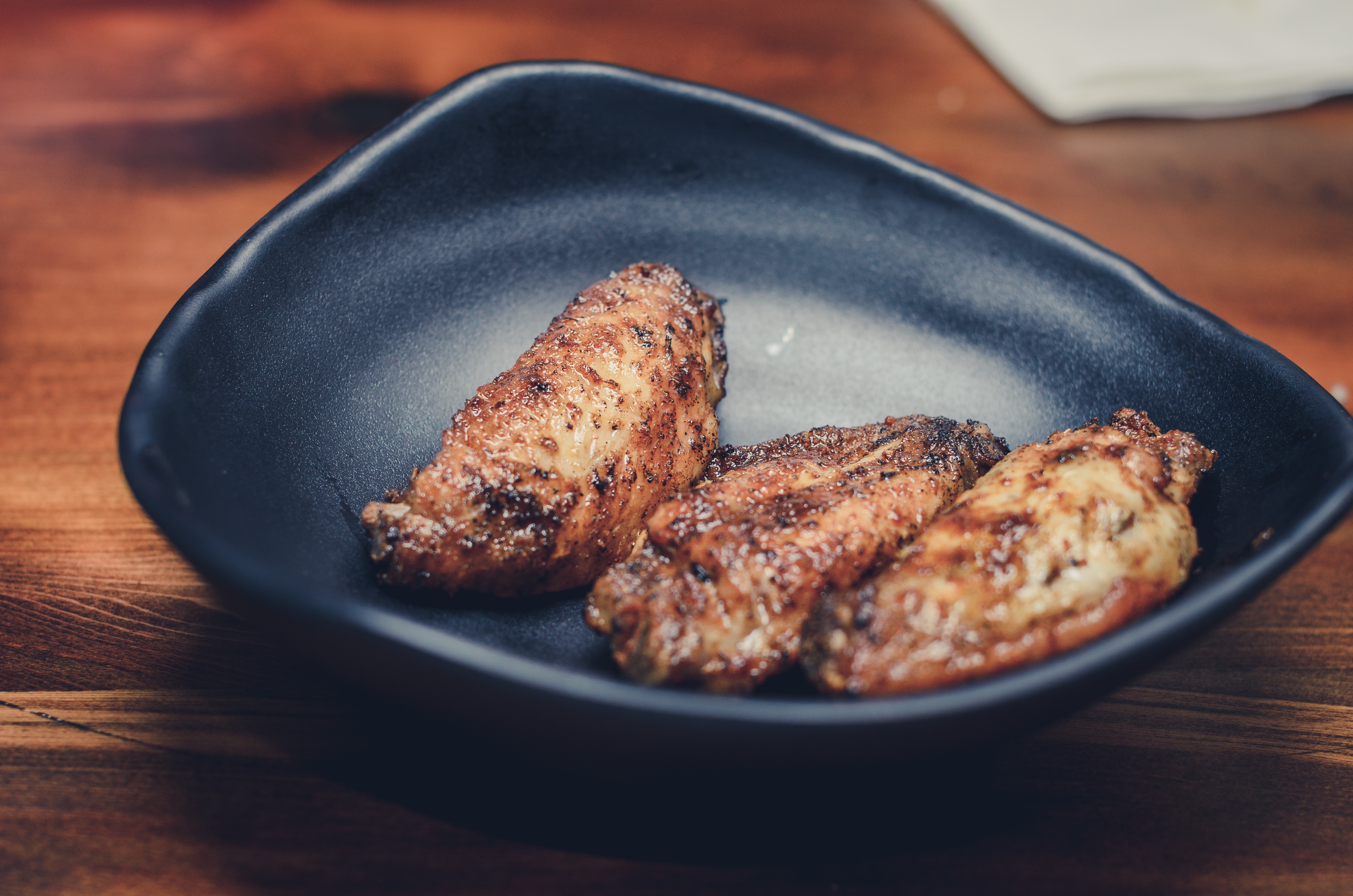 Not much to say about these. If you’ve liked the spice mix so far, you’ll like these too.

I was much more excited for the squid skewers. 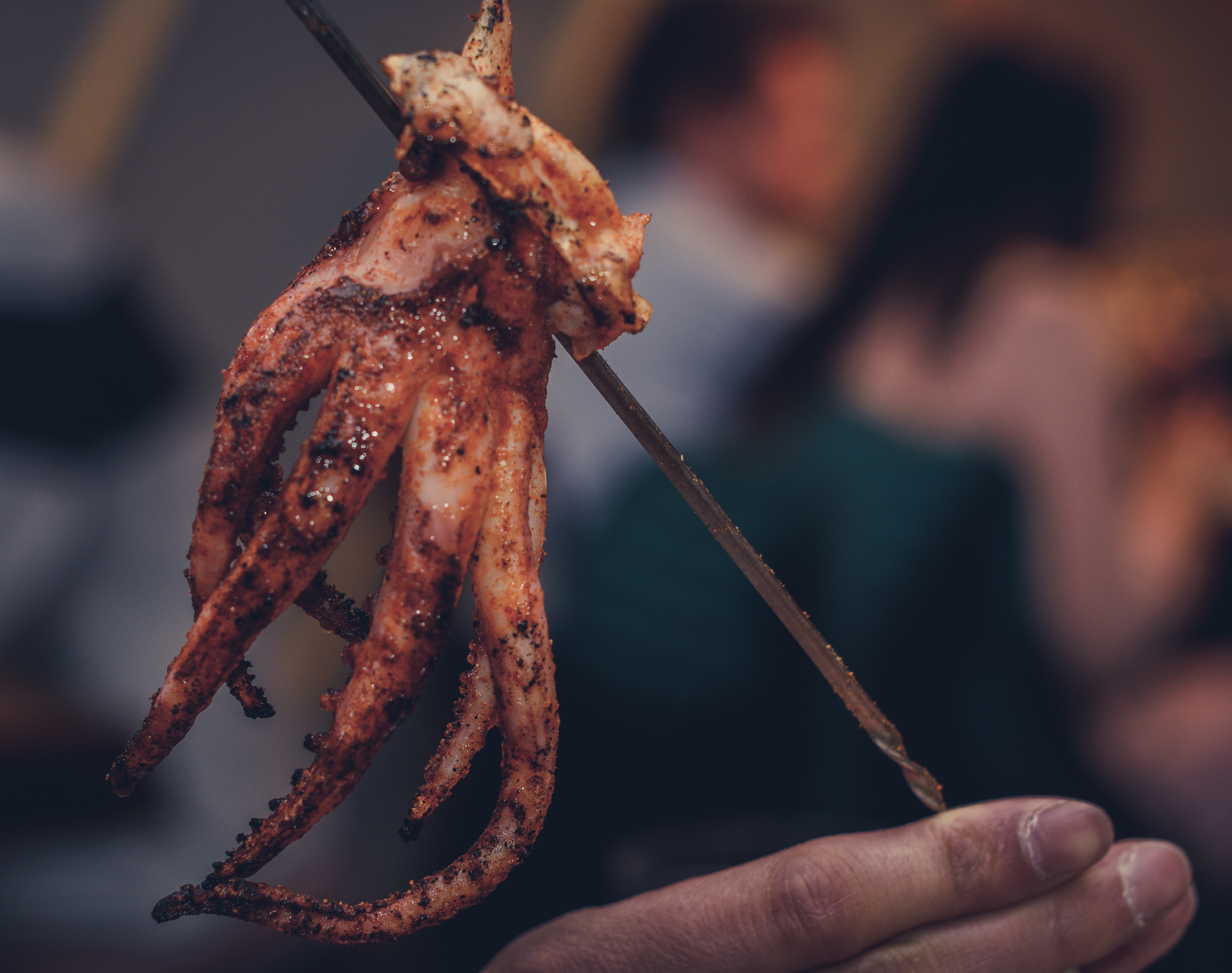 These were definitely my favourite. If there’s any street food from China that I miss it’s grilled squid.

Just a hint of smoke from the grill, and these are nice, meaty tentacles. Not something shriveled up and chewy. I could easily order half a dozen of these for myself and still want more.

But Sian City has more than just skewers. We also decided to sample one of the spicy cold pots. 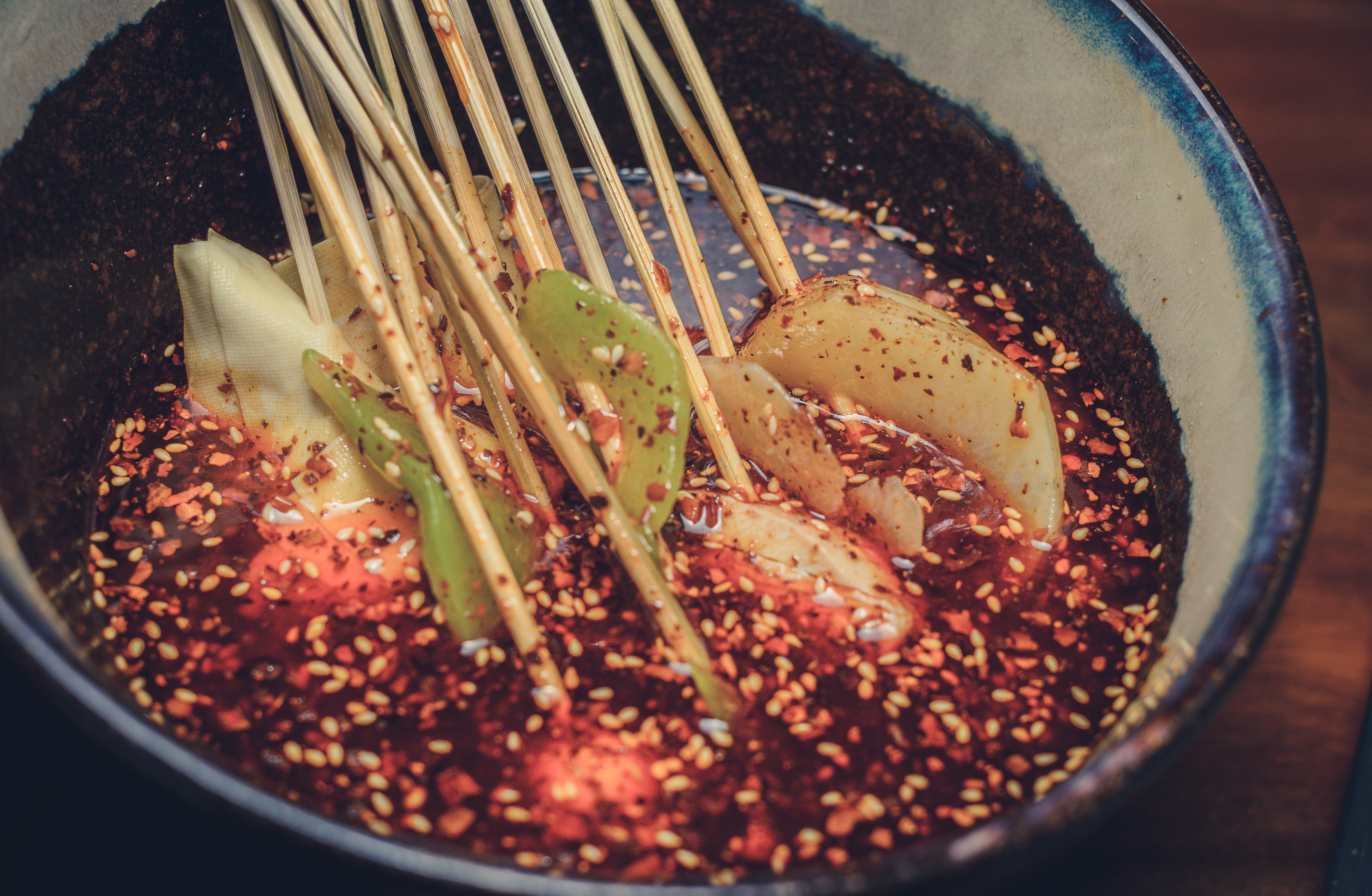 I’m going to recommend that you order this early and then let it sit there. Let the flavours seep in and really soak into the food before you dig in.

You’re able to customize what you get in your pot so we got an assortment of things, bean curd, potato, quail eggs, and peppers. Which is nice because it means that your vegetarian friends can also join in and not go hungry.

The dipping oil is really good, probably not healthy but let’s be honest. If you’re coming here, you’re probably not paying too much attention to your waistline for the night. And despite it being called a “spicy” pot, the spiciness is just there. Not overpowering, but enough of a reminder to let you know that it’s there.

Lastly, we got a platter of assorted bean curd and tripe. 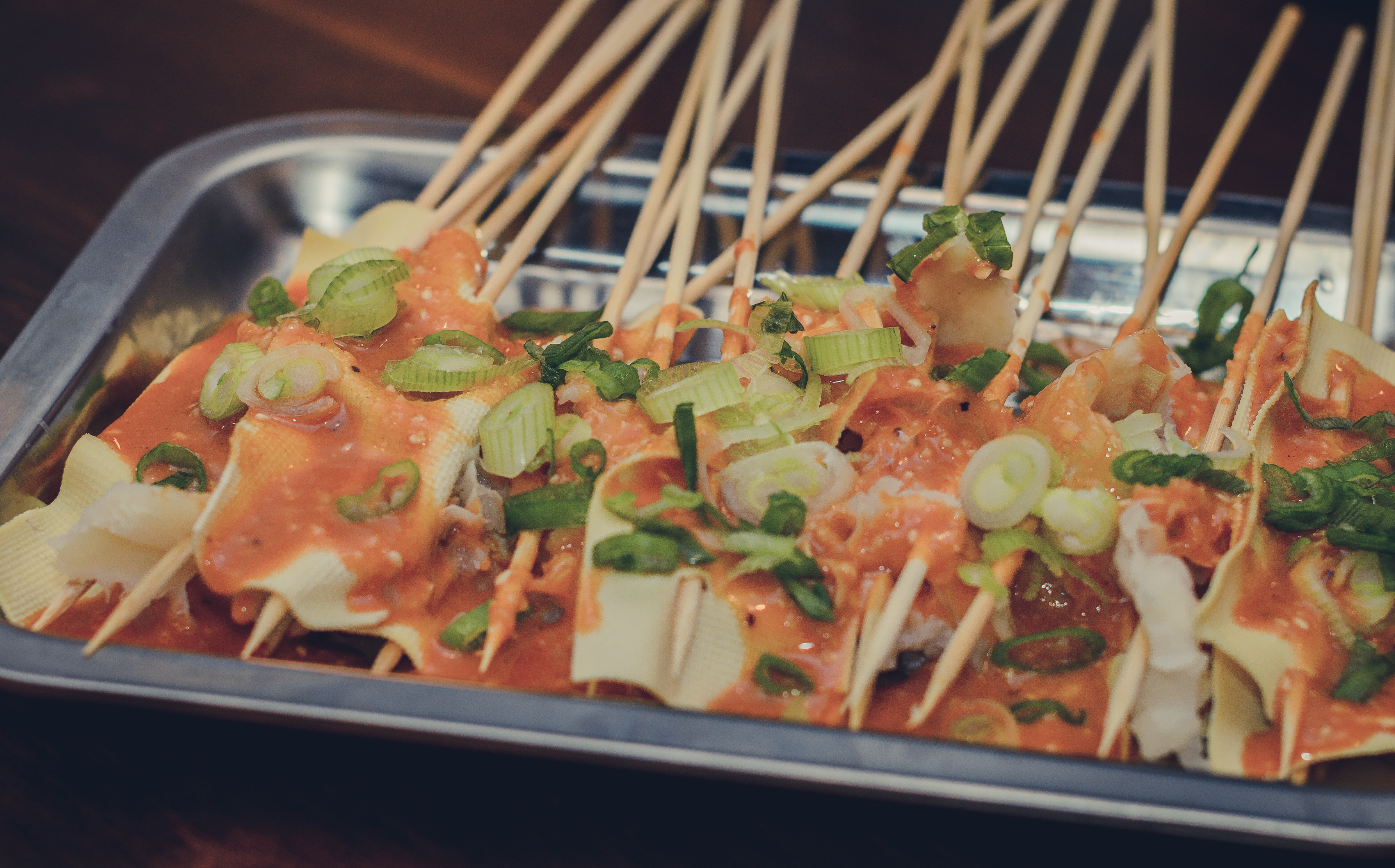 If you’re getting a bit tired of all the skewer spices, I’d recommend getting something like this. I’m not sure what the sauce is, but it appears to be some kind of peanut butter and garlic sauce.

Again, probably don’t want to kiss anyone after eating this. I like tripe so I also thoroughly enjoyed this dish. The bean curd seemed to be the same as what went into the cold pot.

Just writing this article is giving me meat and beer craving. Definitely consider dropping by Sian City the next time you’re in the mood for a night out of drinks and snacks.

I know I will be.