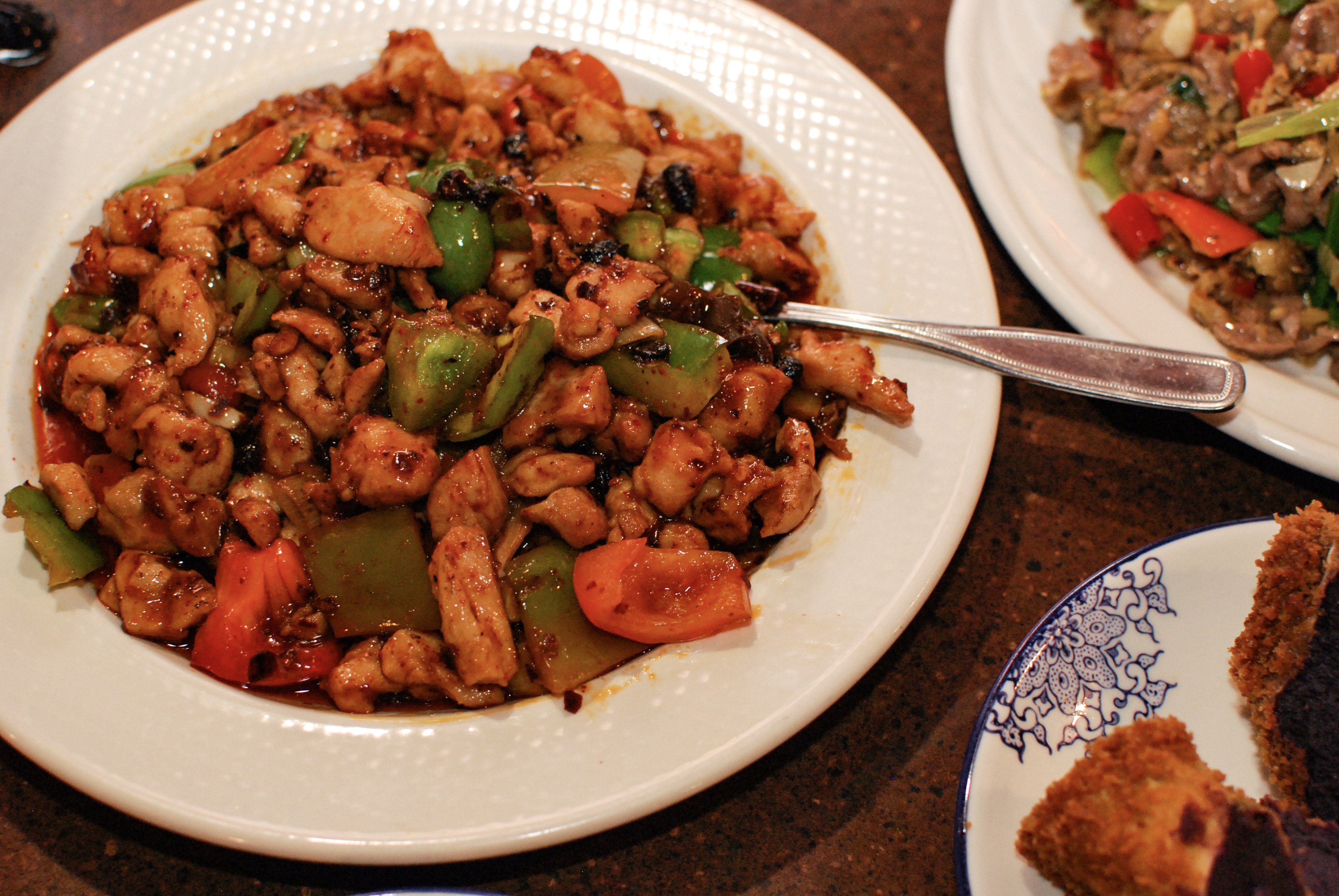 Despite being nearly a decade since I’ve been back to China I still have fond and vivid memories of the cuisine. And once in a while I find a restaurant that is able to bring those memories back in full force. A restaurant like South Silk Road.

Nothing against North Americanized food court Chinese food. But I wouldn’t brave icy roads and winter storms for that stuff.

Tucked away on Calgary Trail, South Silk Road is unassuming but the food is anything but. Originally from the Yunnan Province many of the dishes are seasoned with the infamous Sichuan pepper, known to not only be spicy, but cause that numbing, tingly sensation in your mouth.

Our first dish was Chopped Chicken with Pickled Vegetables and Peppers. 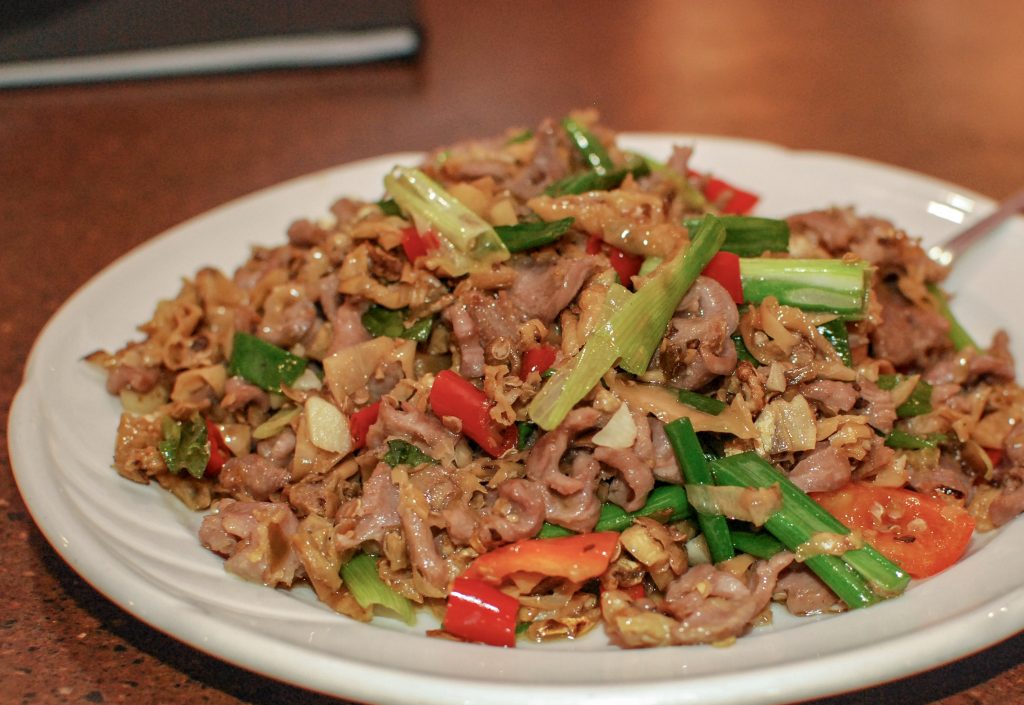 The peppers above however had no numbness but were still spicy. And it was just your regular white meat chicken either. There were pieces that had a bit of bite to it.

My Mandarin isn’t quite what it used to be but I suspect that this dish had a substantial amount of chicken gizzard in it too.

We didn’t have to wait long for that numbing spiciness. Our next dish was Grilled Pork with Cauliflower and there were plenty of the famous pepper here. 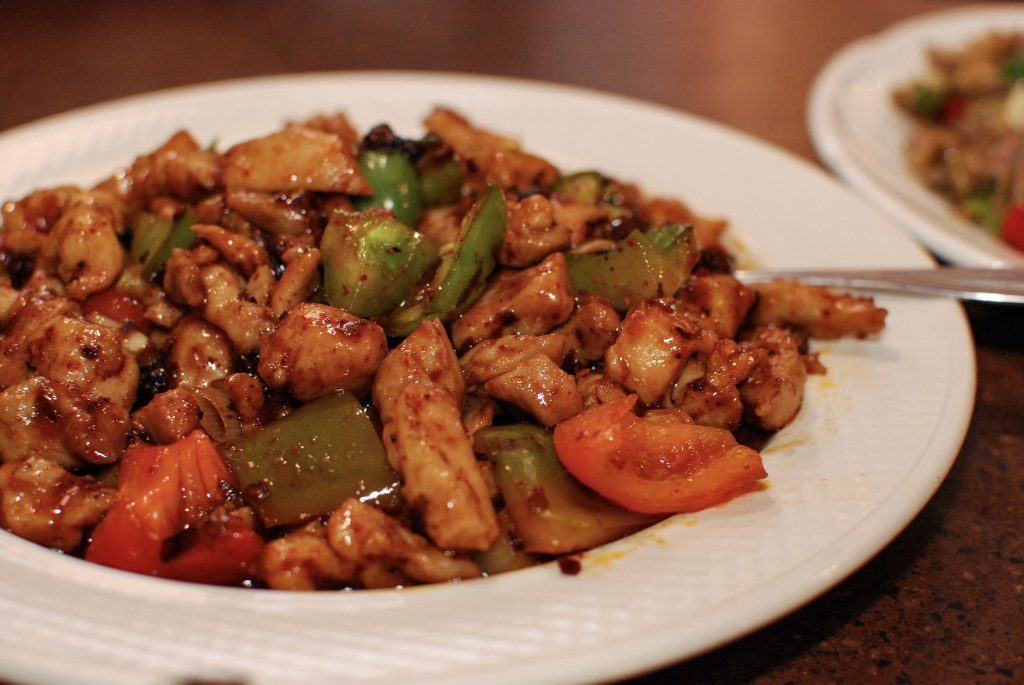 Yes it was quite spicy. If you’re a masochist like me and love spicy food but can’t handle it, I recommend trying to eat the pork with the cauliflower. It almost balances out the spiciness.

And according this dish is the most popular amongst Canadian diners. Though none of us could figure out why this particular dish would be so appealing to the Canadian palette. Leave a comment and let us know if you have an idea! 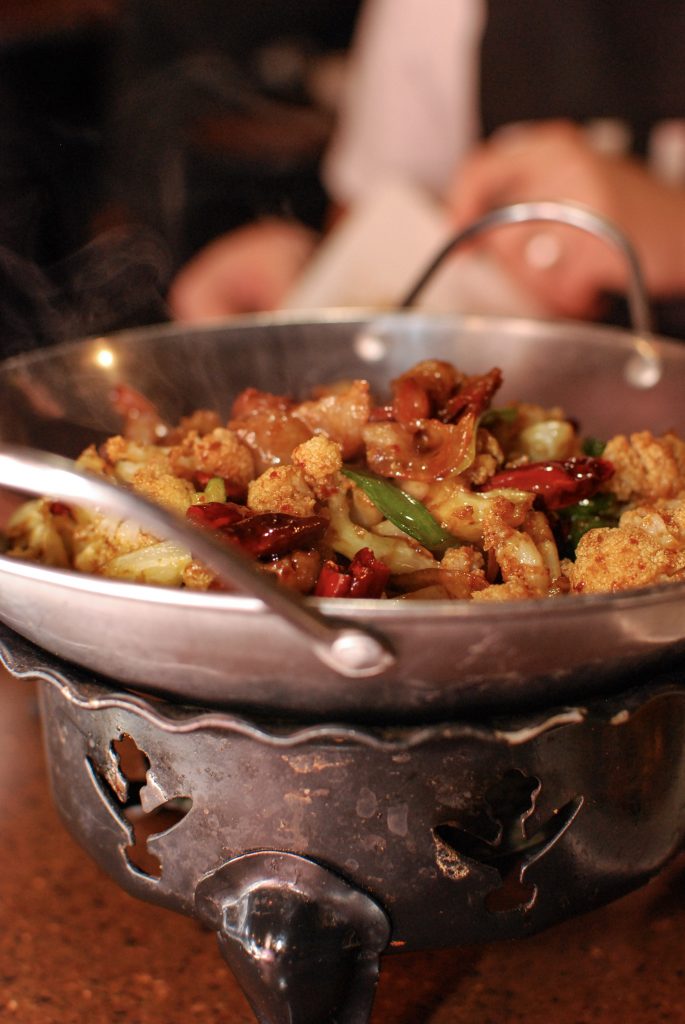 Further inquiries revealed that South Silk Road imports a lot of their ingredients directly from the Yunnan province, including their chilis. I suppose that’s why so many of their dishes remind me of China, because much of it is directly from China.

But that’s also probably why so many of these unique dishes are difficult to recreate. Most restaurants aren’t able or willing to go to the efforts of getting said ingredients.

Oh and the chicken was very spicy. 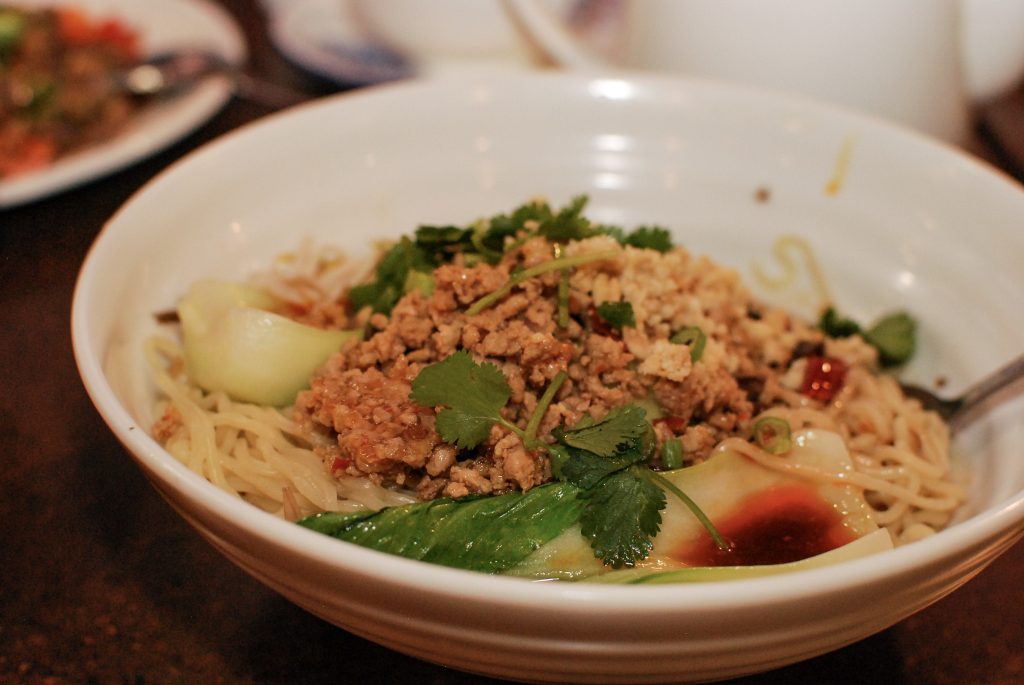 Try and we might, the owner would not divulge who his noodle supplier was. Though I have my suspicions his guy is in Calgary.

A few notes about this particular noodle dish though. It’s a dry noodle dish and has to be eaten immediately. Mix it up and then dig in for 2 reasons.

First, I found that there was a delayed spiciness effect (could have just been me though). But more importantly, this is not a dish you want to take home. It’s just not the same, and has to be eaten fresh while it’s still warm.

Astute readers may notice the  abundance of meat in all the dishes For vegetarian diners there is food for you here too, worry not.

South Silk Road decided to give us an eggplant dish which was very tender. 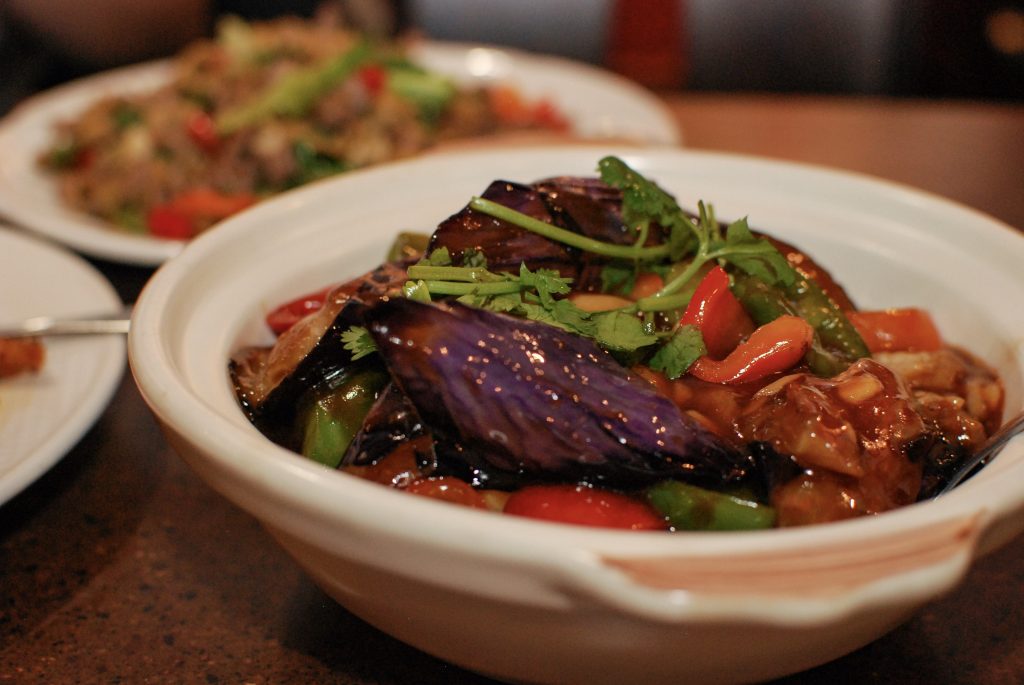 There are other vegetarian options. And upon request certain dishes can be adjusted to be vegetarian. But this is what we personally sampled.

What I can appreciate in the meat dishes is that the vegetables are fresh and crisp. And not fried or boiled into a mushy nothingness.

To end our meal we were first given a number of deep fried rolls. 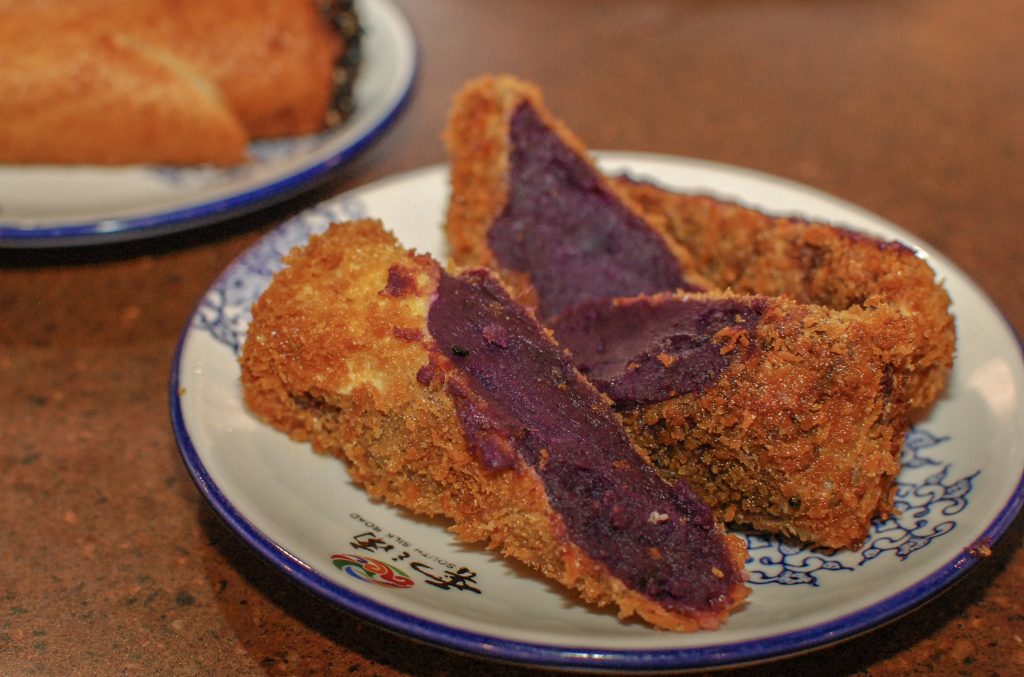 Shown above is the taro which was delicious and sweet. Perfect for dessert.

Unfortunately I inhaled all the taro variants before pictures could be taken. So trust the glutton when I say they were equally as photogenic and very savoury.

Oh and we also were served a Rose Syrup Pudding and a Coconut Milk drink. 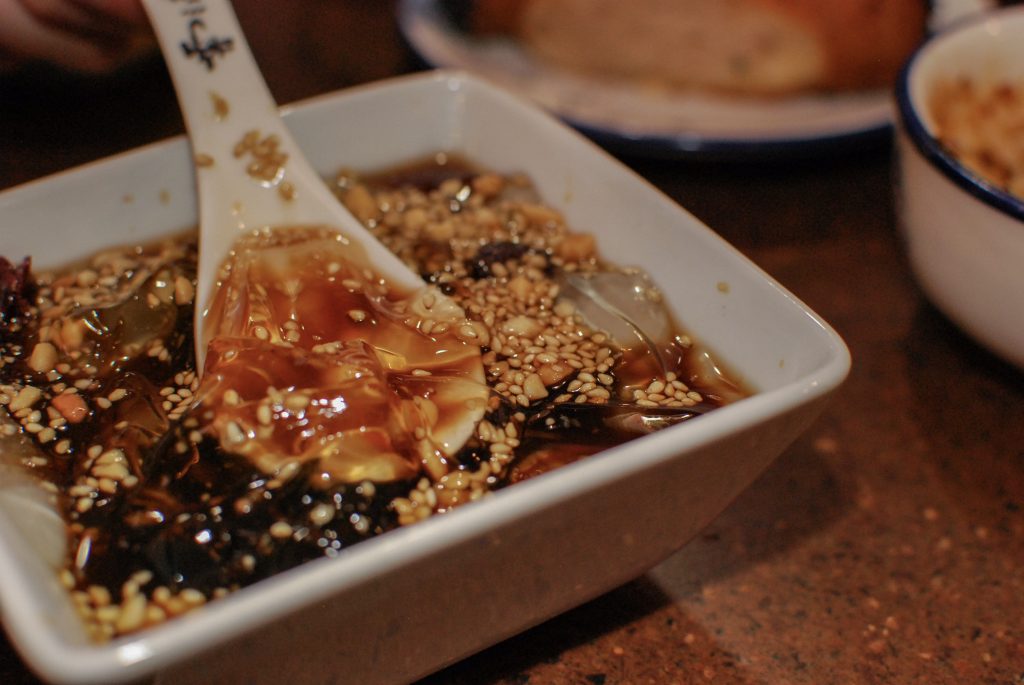 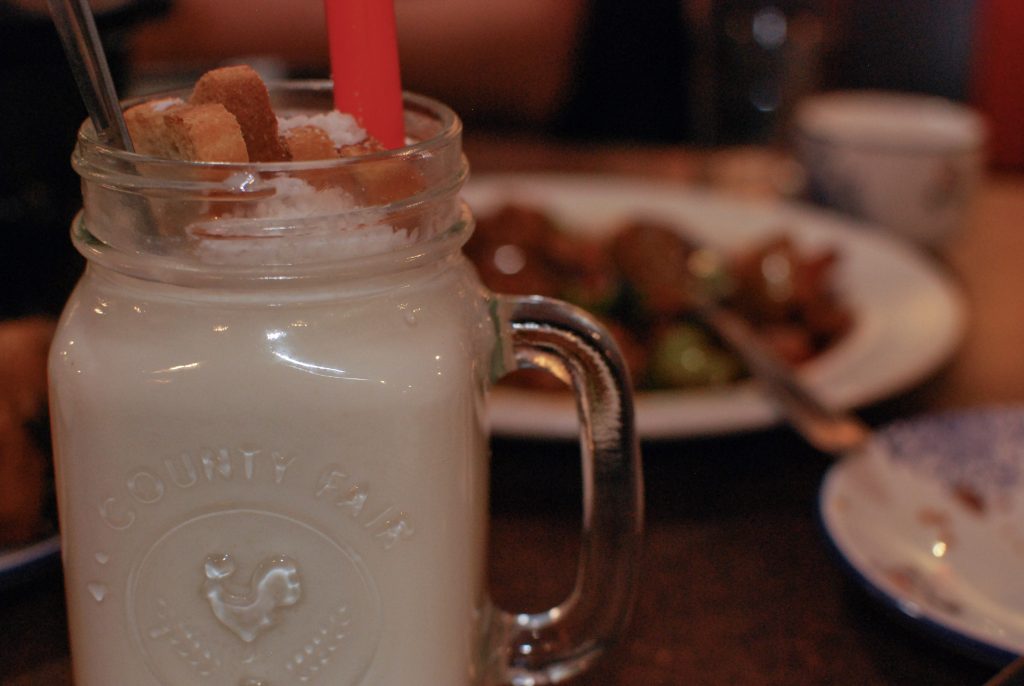 Even though the coconut drink was served as a dessert. I would recommend getting it early to help combat a lot of the spiciness and oil in much of the dishes you’ll encounter.

No doubt about it, the food at South Silk Road is as authentic as you’re going to get in Edmonton, barring flying to China. Just be sure to let your servers know of any nut allergies or spice intolerance. As many of the dishes can be adjusted accordingly.

There is a lot of oil in the dishes, which is also fairly authentic and reminiscent to my experience in China. I’d recommend ordering rice on the side to absorb and counteract the oil. Getting tea or similar acidic teas would help.

But if you want to get a taste of China for a fraction of the price, South Silk Road is waiting for you. And I’d be lying if I said I haven’t been back everytime I wanted to reminisce.