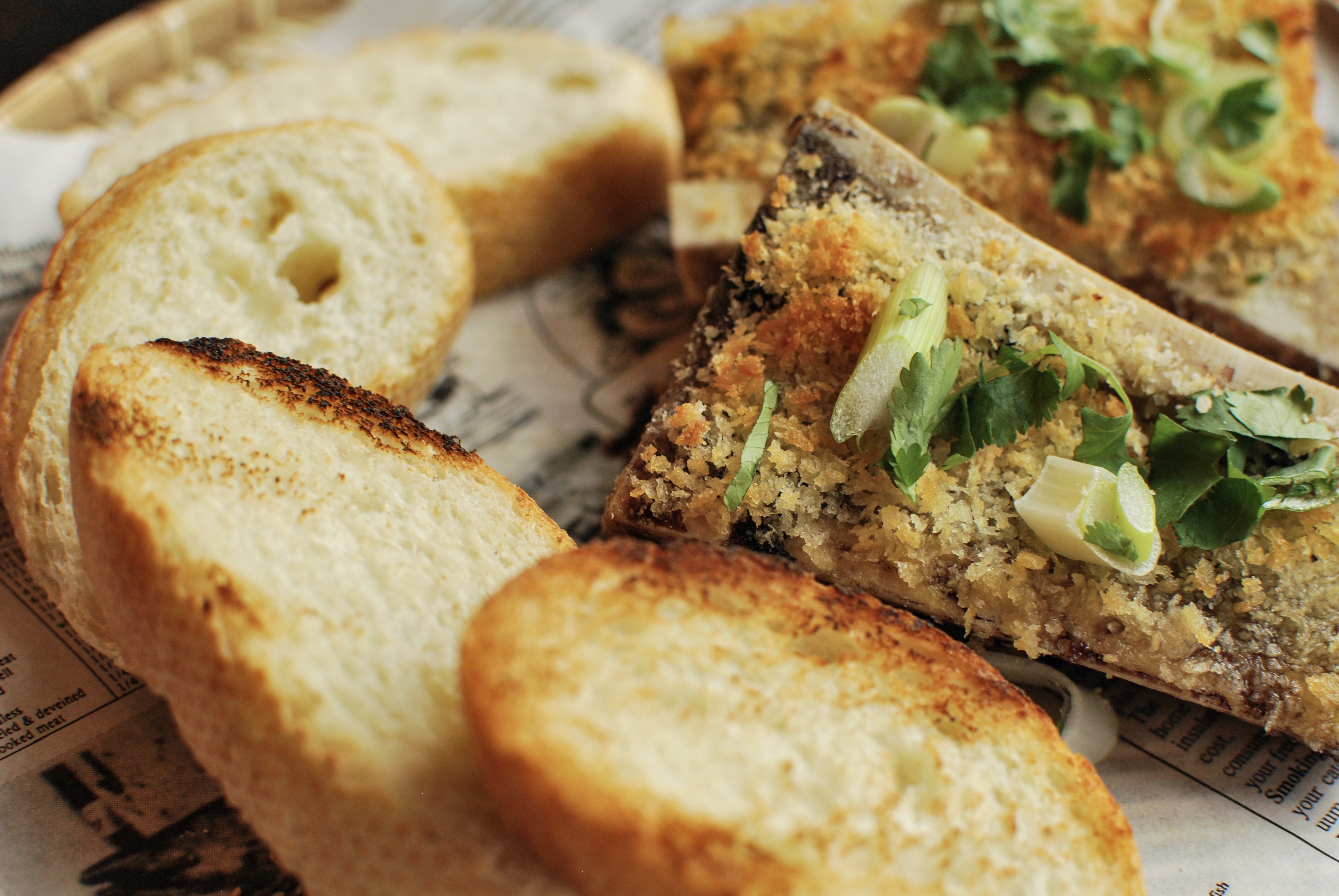 It’s rare to find a fusion restaurant that respects all parts of what’s being fused together. XO Bistro has been able to create dishes that are better than the sum of their parts, that both look and taste great.

There is nothing boring. No concerns of dishes being half thought out. Just a respect for the food and doing justice to the culture.

Our first dish are salad rolls. 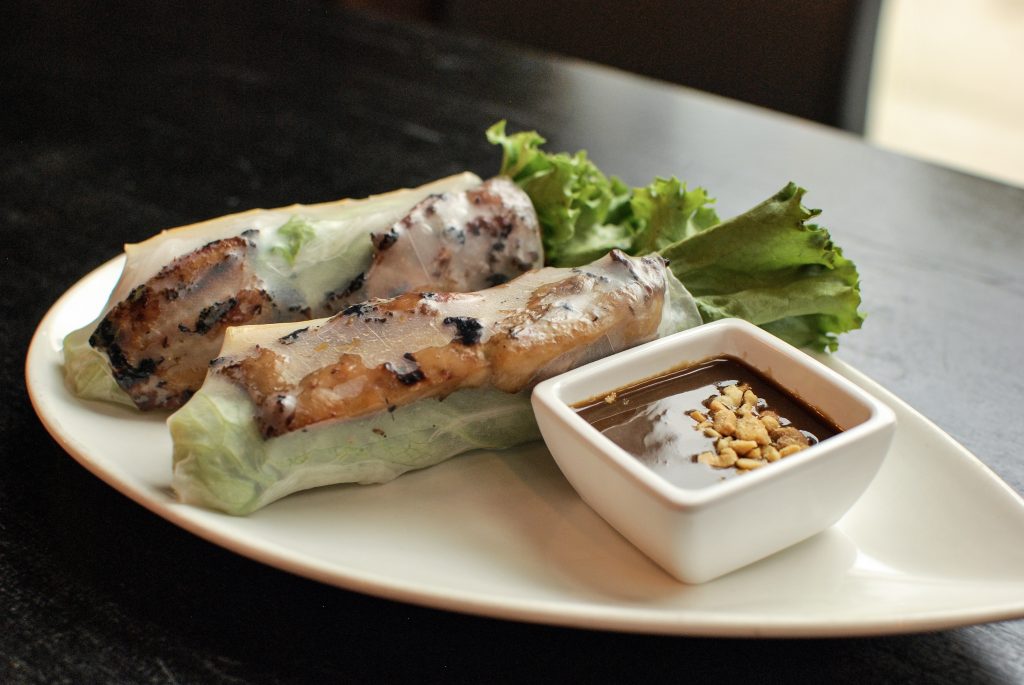 Traditionally, I don’t like salad rolls. I’ve found many other places have limp lettuce with as much rice noodle crammed into the rice paper to give it the appearance of bulk but little flavour.

Not so with XO Bistro’s. Even through the photo you can see how fresh everything is. In fact, all the ingredients compliment each other in the rice paper without one component overpowering the others

There’s something in the centre that gives it a nice crunch and extra bit of texture but I was too busy enjoying myself when the waitress was telling us what it was.

And Next was something I had never heard of so this dish falls more with the fusion end of things: Glass dumplings. 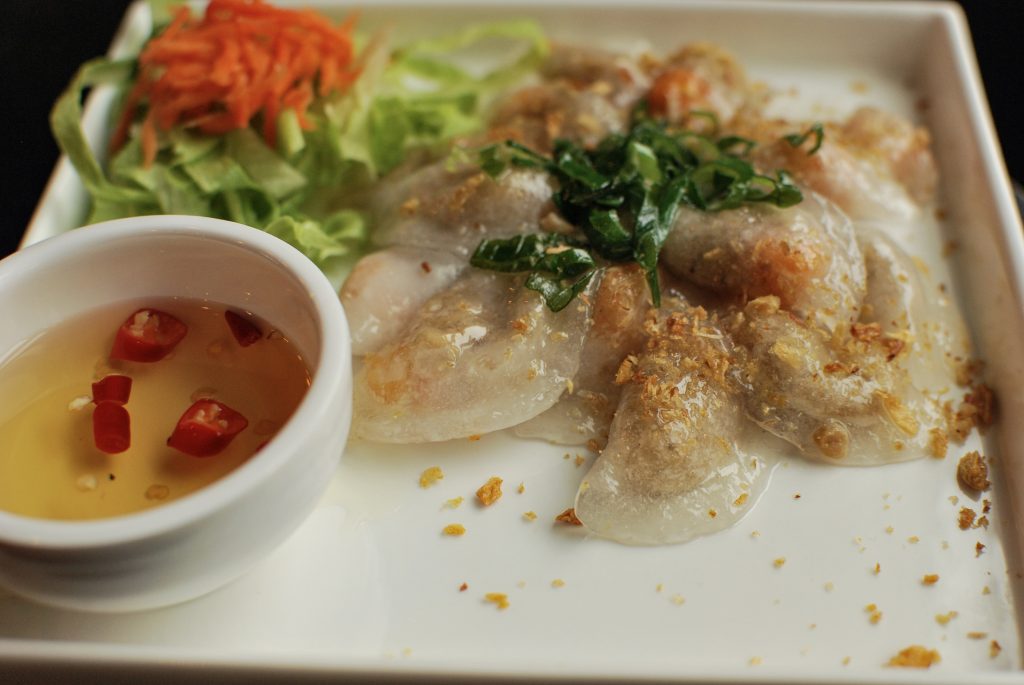 They definitely look pretty. And it was novel, being able to see the filling of the dumplings. Which were not shrimp or pork, but both.

If there was an appetizer that they were proud of, I would say it was the glass dumplings. While the owner was more than happy to talk about how long they worked on them, he would not tell us how the dumplings were made.

The remaining appetizers were definitely more on the Canadian-side of things but again influenced by the Vietnamese ingredients that were already in use. 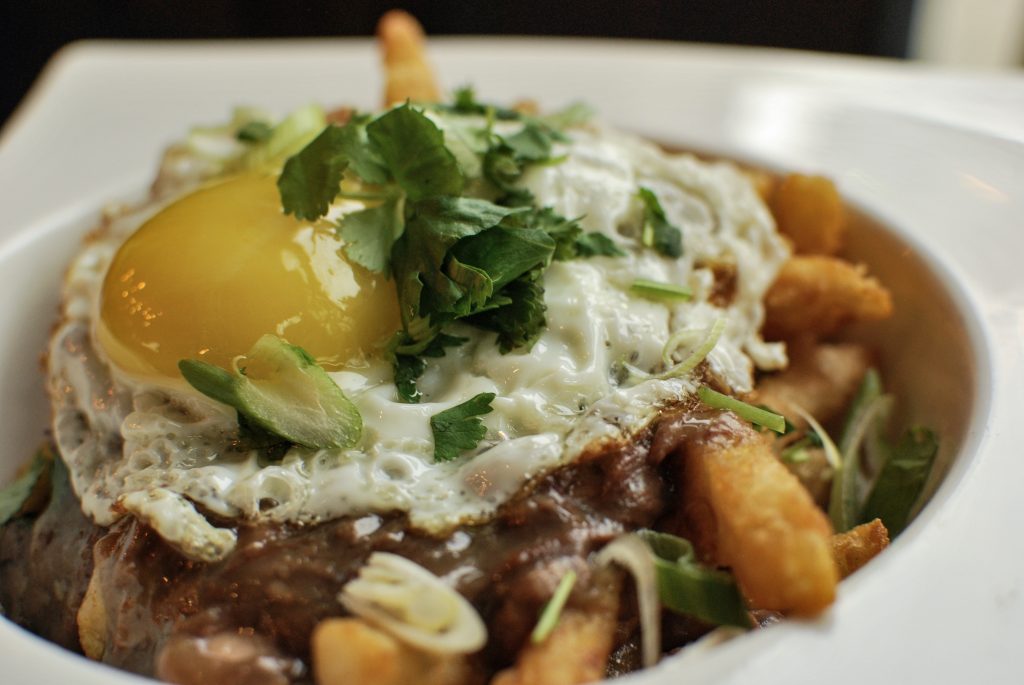 XO Bistro makes all their broth in-house using bones. This is important for their pho, but it turns out that oxtail bones also make a delicious, beefy gravy.

Described as an “Asian Poutine” all the ingredients again compliment each other. Don’t brush off those greens, they aren’t just for show. And the runny egg yolk adds an extra bit of complexity and texture to the dish.

Because a problem I’ve had with other poutines is that nearing the bottom of the bowl everything tastes the same and boring. But here, the excess egg has pooled down there so every bite from top to bottom is different.

And then we have my personal favourite, the bone marrow. 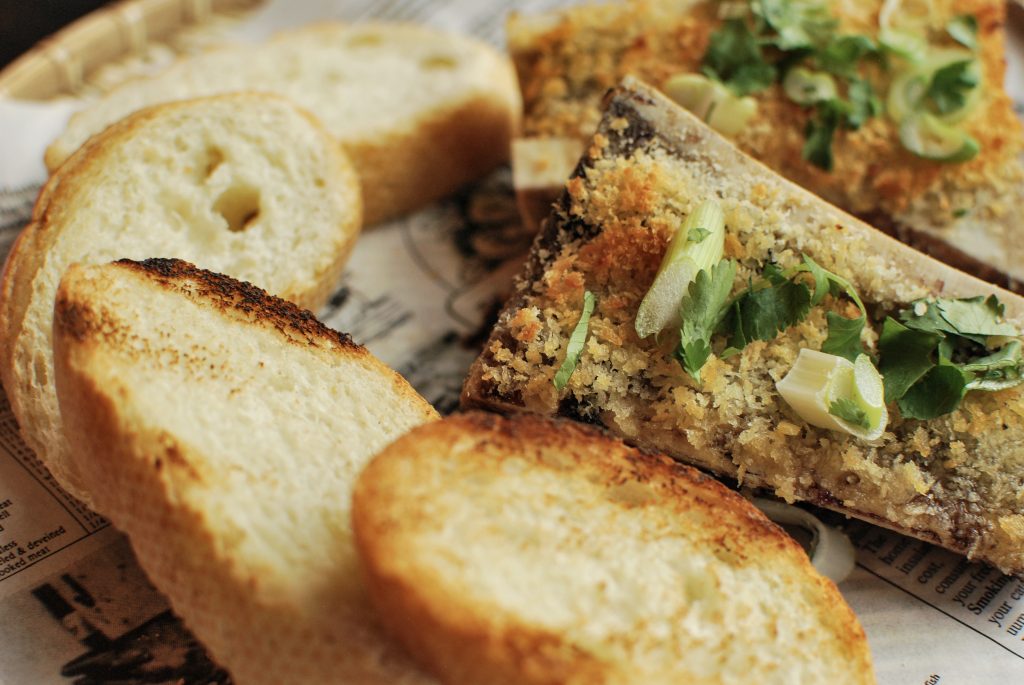 I am warning you right now, do not eat this if you’re trying to be healthy. This appetizer was rich beyond rich. I didn’t need the bread, I could have scooped that delicious jelly straight into my mouth.

And I would have had I been dining alone.

Definitely get the bone marrow if you’re planning on drinking, are drinking, or are recovering from drinking,

Then we got to sample the pho. The staff were very clear that their soup is made in-house, with triple the amount of bones, and no MSG. They were very proud that their broth was not from powder.

“It may be more expensive, but it is worth it.” The owner told us. And I agree, you can definitely tell. There’s just more depth to the broth and a richness you can’t get with powder soup. 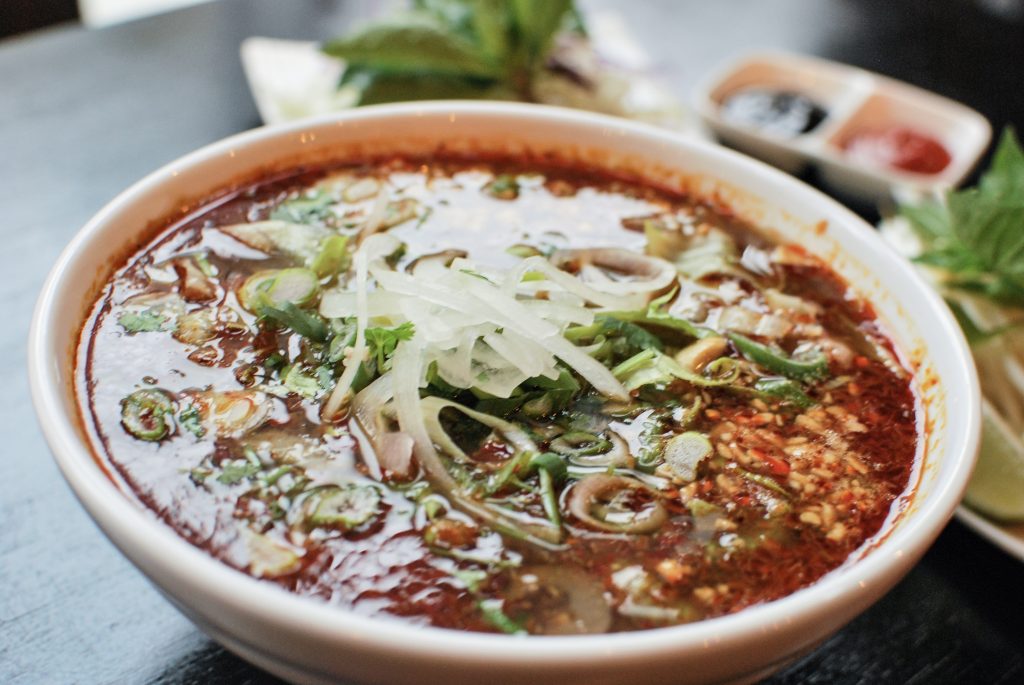 I was hesitant to try this one because of how spicy it looked. But worry not, it just looks spicy.

Get it if you like satay because it was definitely heavy on the satay. I would also say it was the richest and the thickest of all the pho we tried.

Next, The Works Pho. 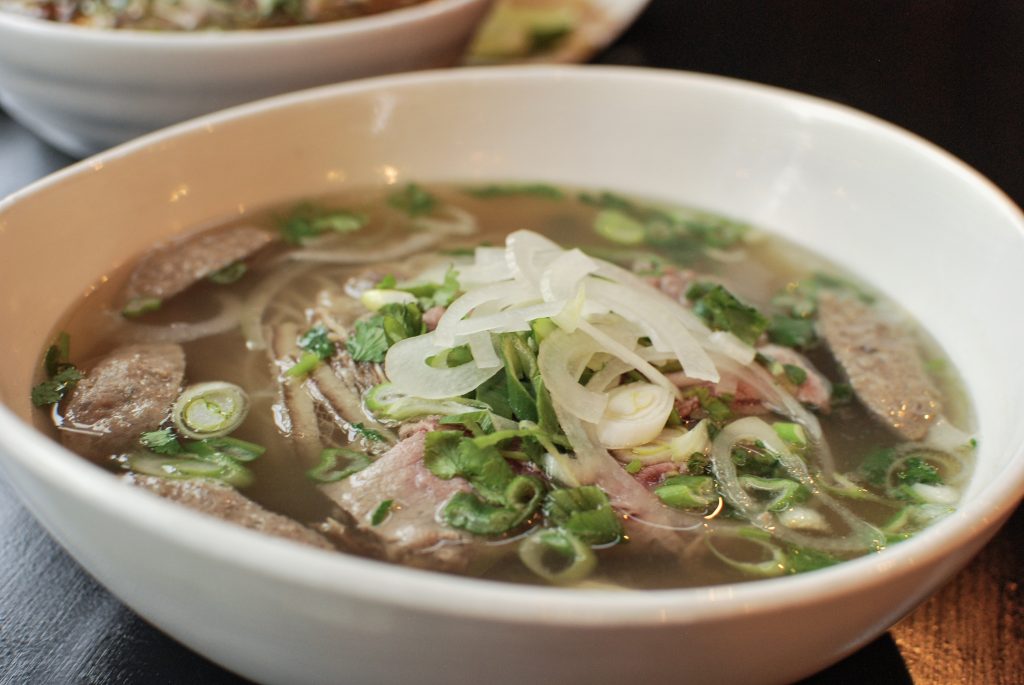 Our bowl came with flank, rare beef slices, and pork balls. But if you want, you can get oxtail, tendon, or beef balls instead. The owner told us that he’s considering adding tripe and other cuts in the future.

The Works is a nice bowl of pho. I would say it’s like a standard bowl of pho that you’d get at a restaurants, but better. I could be biased but that’s probably because I prefer having actual thick slices of beef.

As opposed to slivers of meat that are disintegrating into the soup.

Last, and my favourite, the BBH or Bun Bo Hue. 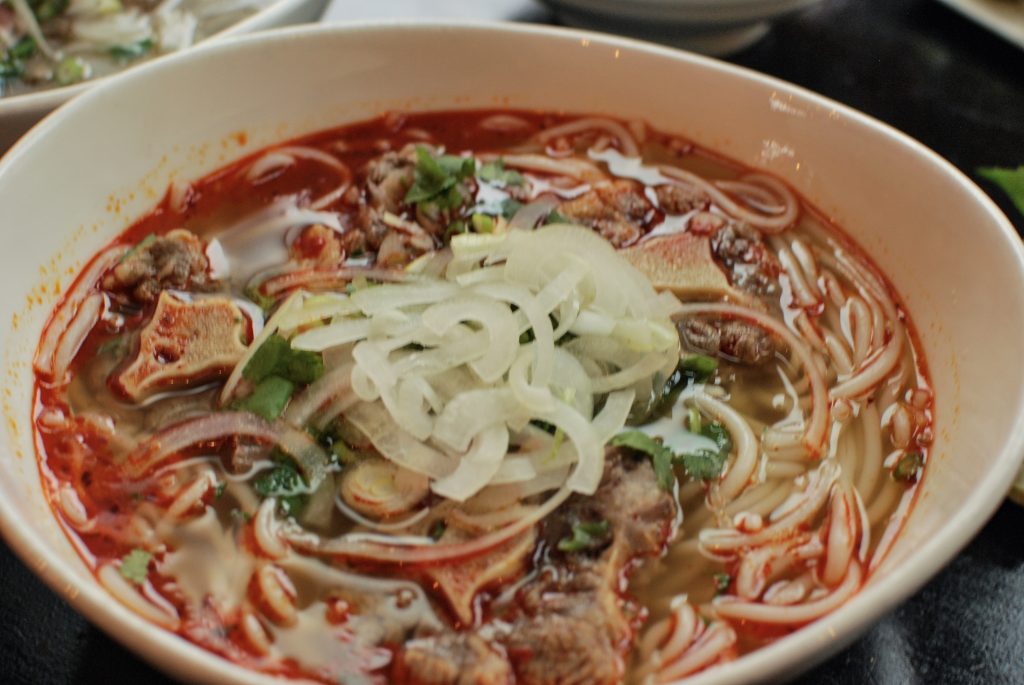 My bias again might be showing because of how partial I am to oxtail anything but it was good. Some people might think it’s too rich but I loved it.

And you are worried about the richness squeeze some fresh lime juice in. My partner had to do this before they found it enjoyable.

XO Bistro also has a vegan pho available which we did not get to try for better or worse. Because we were getting really full.

Also of note is that Gong Cha upstairs. If you do place an order, they have a little elevator which makes the bubble tea delivery to the ground floor which is pretty neat.

Honestly, your biggest problem is going to be the parking. With everything being downtown you’re going to have to pay for it, assuming you can find parking.

We were lucky when we went on a Sunday, because I got a bit sneaky and parked in Manulife Place for free. And it was certainly worth braving the cold for the rarity that is delicious fusion cuisine.